Apple on Monday unveiled macOS Big Sur, the newest version of macOS that's going to be released in the fall. Named after Big Sur, California, renown for its scenery, the new update features a fresh, clean design along with some useful new features.

Subscribe to the MacRumors YouTube channel for more videos.
We went hands-on with macOS Big Sur in our latest YouTube video, giving MacRumors readers a first look at what the new software looks like.

macOS hasn't had a major interface overhaul for some time now, and macOS Big Sur is a welcome change, refining and improving on the existing design for a new look that's both fresh and familiar. 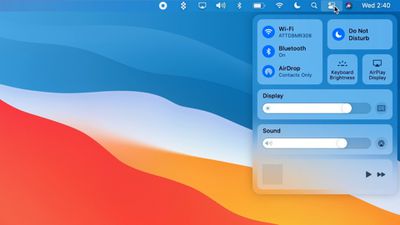 The menu bar is now more translucent and better blends with the wallpaper, and it's more customizable. There's a dedicated Control Center that provides access to WiFi, Bluetooth, AirDrop, Do Not Disturb, display brightness, volume level, and more, and you can customize it to your liking.

The Control Center is a major quality of life improvement in macOS, putting most of the settings and controls that you need just a click away while also streamlining the menu bar. Also new to the menu bar is a revamped battery icon that brings back the reading of how much time remaining you have on a battery charge, something that was removed way back in macOS Sierra.

Apple also added a whole new battery usage section to System Preferences so you can see how your battery has drained over the last 24 hours or the last 10 days.

Next to the Control Center, there's an upgraded Notification Center with new widgets that can be accessed by clicking on the right side of the menu bar. The new widgets look similar to the widgets in iOS 14, and are now available in multiple sizes and with a fresh design. Widgets are now grouped by app, which makes incoming notifications much easier to parse.

Throughout the operating system, Apple has added more rounded and refined corners, full-height translucent sidebars for apps, and redesigned icons. Icons for Apple apps are all now rounded square-shapes, for a neater Dock, and buttons and controls for apps appear when needed and disappear when not needed to put more focus on content.

Nothing in macOS Big Sur looks wildly different and there's nothing to relearn, but it does offer up a clean design that's a refreshing change of pace. Notably, a lot of the sounds in macOS have been refreshed, and Apple even brought back the startup chime that many Mac users have missed.

Safari received a major overhaul with a new customizable start page. You can choose your own wallpaper and choose what's displayed on the page, picking from options like frequently visited sites, Siri Suggestions, Reading List, iCloud Tabs, and more.

Apple is adding better support for extensions, which can be downloaded from a dedicated section of the Mac App Store. Extensions can be installed for every site, a single site, or a single site for a limited amount of time, giving you more control than ever over what extensions can do and see.

Privacy was a major focus in macOS Big Sur, as usual. Along with the deeper controls over extensions, Apple has added a Privacy Report and Privacy button that provide details on the trackers that different websites are serving up so you can see the data a website is attempting to learn about you.

Safari has a built-in translation feature that can automatically translate entire websites written in seven different languages, which is a handy option that will let people abandon add-on translators. Safari is also faster than ever, with Apple adding performance and efficiency improvements.

Messages for Mac is now a Catalyst app, which means that it adopts many of the features available in the iOS version of Messages. It supports all of the new iOS 14 Messages features like pinned conversations, mentions, and inline replies.

It also now works with some older functions like Message Effects, and there's a new Memoji creator so you can create Memoji and share Memoji stickers through the Mac Messages app. An all new search interface also makes it easier to find links, photos, and text from older conversations.

Like Messages, Maps has been updated to bring its functionality more in line with Maps for iOS. Cycling directions and routes with EV vehicles are available, as are Guides, a new feature for finding awesome spots to visit around you.

Maps now supports Look Around, it works with indoor maps for the first time, and Maps for Mac can be used to view shared ETAs so you can keep track of when friends and family will arrive at a location from the desktop.

The Photos app has new editing capabilities like a new Retouch tool, Home app improvements allow for face recognition for cameras, AirPods feature faster and more efficient automatic device switching, ‌Siri‌ can answer a wider range of questions, and there are some improvements coming to the ‌Mac App Store‌ that will make it easier to view and understand privacy policies.

There are tons of other smaller changes in macOS Big Sur, and we'll cover those in future videos and in our macOS Big Sur roundup, which will be updated with a full feature list later this week.

Big Sur is available for developers at the current time, but Apple also plans to make a beta available for public beta testers in July. macOS Big Sur will see a fall release alongside iOS 14, iPadOS 14, tvOS 14, and watchOS 7.

StellarVixen
I am bothered by inconsistency in UI design. For example, why is Messages app 3D-ish, while Calendar is absolutely flat?


Either go one way or another. Looks to me like they still haven't made up their mind yet.
Score: 31 Votes (Like | Disagree)

Not so sure about the start up chime. I used to like it, but have gotten used to it not making sounds. Since I use my Mac at work and arrive a little late, people always hear when I turned on my Mac.

So, you need Apple to cover your bad work discipline?

roland.g
Battery is replacing Energy Saver? My Mac Mini and iMac run off the wall. What Battery?

And don't get us started on how the battery icon like many others is so bad and in such stark contrast to the direction most of the other UI elements are evolving.
Score: 15 Votes (Like | Disagree)

chris4565
The design is controversial but I personally really like the more playful, colorful approach + the rounded corners.
Score: 15 Votes (Like | Disagree)
Read All Comments

Friday May 20, 2022 6:50 am PDT by Joe Rossignol
Earlier this week, The Information's Wayne Ma outlined struggles that Apple has faced during the development of its long-rumored AR/VR headset. Now, in a follow-up report, he has shared several additional details about the wearable device. Apple headset render created by Ian Zelbo based on The Information reporting For starters, one of the headset's marquee features is said to be lifelike...
Read Full Article • 129 comments