Barclays on iPhone 12 Lineup: No EarPods in Box and Possibly Not Even a Charger

Apple is widely expected to release four new iPhone 12 models later this year, and ahead of time, analysts at British bank Barclays have outlined their expectations for the devices based on discussions with multiple Apple suppliers. 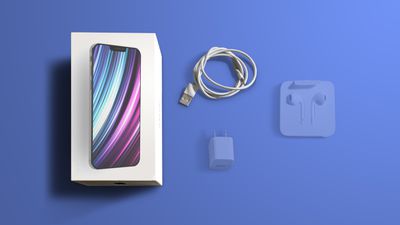 While there would certainly be environmental benefits to Apple not including a power adapter with the hundreds of millions of iPhones it sells each year, such a move would obviously be inconvenient for customers without a spare USB-C charger. Apple's basic 5W power adapter can be purchased separately for $19, while the 18W power adapter included with iPhone 11 Pro models can be purchased for $29.

Earlier this week, the anonymous Twitter user Mr. White shared photos of a 20W power adapter that he suggested will be included with iPhone 12 models, which clearly contradicts with what Barclays analysts are hearing.

Barclays estimates that mass production of iPhone 12 models is four to six weeks behind schedule compared to a usual year. The analysts believe that Apple will still announce the new lineup in September, but at least some models might not be available to order until October or November, as was the case with the iPhone X and iPhone XR in recent years.

The analysts expect the two higher-end iPhone 12 Pro models to feature a triple-lens camera system with a LiDAR Scanner, first introduced on the iPad Pro. This would pave the way for new augmented reality experiences.

Barclays also said that it has heard about a potential iPad Pro refresh later this year, but it has no further details right now.

Last, the analysts expect third-generation AirPods to launch in early 2021.

Barclays analysts have a mixed track record in relation to Apple rumors. Their accurate predictions have included True Tone coming to the iPhone 8 and iPhone X, the removal of the headphone jack adapter with iPhone XS and iPhone XR models, and the removal of 3D Touch on all iPhone 11 models, while they were incorrect about the iPhone XS possibly having a smaller notch and the base iPhone 11 having 4x4 MIMO.

cmaier
There will be a charger.
Score: 59 Votes (Like | Disagree)

cmaier
Next: “analyst predicts next iphone will ship without a box. Said the analyst ‘we expect apple will look to wrap the iphone 15 in recycled face masks and slip them in sandwich bags.’“

These guys don’t know anything.
Score: 56 Votes (Like | Disagree)

anthogag
I heard a rumour the iPhone box will not contain an iPhone. The box will be empty. No phone, no charger, and no earbuds.
Score: 46 Votes (Like | Disagree)

There will be a charger.

Exactly. Who would ship a phone without any way to charge it? Think of people who are buying their first phone and don't already have a collection of chargers. That's a stupid thing to report.
Score: 34 Votes (Like | Disagree)

Seanm87
No way they won’t include a charger. Earpods yes, charger no.
Score: 25 Votes (Like | Disagree)
Read All Comments