Apple today introduced watchOS 7, the newest version of the watchOS software that's designed to run on the Apple Watch. Following the conclusion of the event, Apple has released the first beta of the watchOS 7 update to developers for testing purposes. 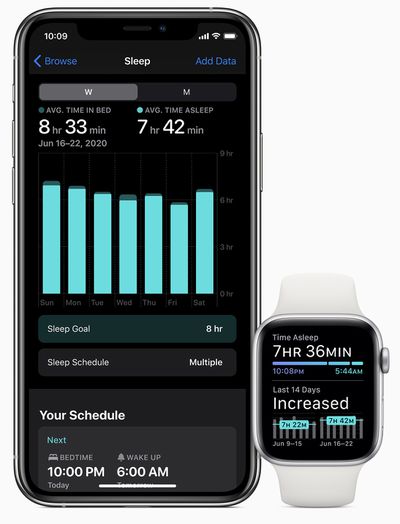 To install the beta, you will need to download the proper configuration profile from the Apple Developer Center. Once the profile is in place, the watchOS 7 beta can be downloaded through the dedicated Apple Watch app on the iPhone by going to General > Software update.

To update to the new software, the Apple Watch needs to have 50 percent battery life, it must be placed on the charger, and it must be in range of the ‌iPhone‌. It would be wise to install the beta on a secondary device rather than a primary device as this is an early version of the watchOS software that still has bugs that need to be addressed.

watchOS 7 introduces a new sharing feature that allows your watch faces to be shared with others. Watch faces can be shared through Messages or Mail, discovered through the App Store, or through websites.

There are new Chronograph Pro watch faces, as well as a filters option for the Photos face and rich complications for the X-Large face. Developers can now offer more than one complication per app, and it's easier to change complications on a watch face.

watchOS 7 includes a new Sleep Tracking feature for the first time that uses the Apple Watch's accelerometer to detect micromovements. The feature provides information on how well a person slept, charts sleep quality over time, and offers a Wind Down feature for helping users get ready for bed.

There's also an alarm feature that uses haptic feedback or gentle sounds, as well as a Sleep Mode that turns on Do Not Disturb and automatically darkens the watch screen while you're sleeping.

Along with Sleep Tracking, Apple has added a new feature that tracks hand washing to make sure you're washing your hands for at least 20 seconds. There's a 20-second countdown timer that comes up whenever the Apple Watch detects handwashing motions and sounds. The Health app will also show the frequency and duration of the user's handwashing.

The Activity app is being renamed to Fitness with new workout types like Dance, Core Training, and Cooldown, the Hearing app has been improved to incorporate media, cycling directions are available in Maps, and Siri can do translations right on the Apple Watch.

watchOS 7 is only available to developers at the current time, but for the first time this year, Apple also plans to offer a watchOS beta for public beta testers.

kylew1212
Am I the only one who wants the fitness app on my iPad so that I can more easily review past workouts? Or ant+ support in the watch..?
Score: 6 Votes (Like | Disagree)

Am I the only one who wants the fitness app on my iPad so that I can more easily review past workouts? Or ant+ support in the watch..?

Especially a live feed from watch to phone.
So frustrating when doing an Outdoor Cycle workout, phone is docked on bike yet I have to try and look at my watch for progress updates. No ideal when doing 20mph on a busy road ?
Score: 1 Votes (Like | Disagree)