Apple today introduced the newest version of macOS, the operating system that runs on the Mac. macOS 11.0 Big Sur is now available in a beta capacity for registered developers who want to test out the new features. 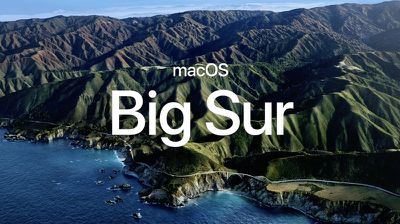 The macOS Big Sur beta can be downloaded through the Apple Developer Center and once the appropriate profile is installed, subsequent betas will be available through the Software Update mechanism in System Preferences. As with all of the new betas, Apple recommends not installing macOS Big Sur on a primary machine because it is early release software and could have major bugs.

macOS Big Sur is a major update that introduces a refined design for the macOS operating system. It's iOS like, but immediately familiar to Mac users with small tweaks to window design, color palette, app icons, and more.

Control Center is now available for the Mac, offering up quick access to controls right from the desktop, and the updated Notification Center includes interactive notifications and redesigned widgets that mirror the widgets on iOS.

Safari has major new features that include a customizable start page, built-in translation, and a Privacy Report that lets you know what trackers each webpage us using. There's a new Mac App Store category for extensions, and tools for devs to bring extensions created for other browsers to Safari.

The Messages app for Mac is now based on the Messages app on iOS with support for all of the new features like pinned conversations, @ mentions, inline replies for group messages, and more. Messages effects and Memoji Stickers are now available for the Mac, as are Memoji customization options.

Maps has also been overhauled in macOS Big Sur with Guides, Look Around, indoor maps, and more, plus support for cycling routes and electric vehicles.

macOS Big Sur is only available to registered developers at this time, but later in the summer, Apple will make a public version of the macOS Big Sur beta available to give public beta testers a chance to try the software before it sees a public launch this fall.

Lazy
Looks like a nice upgrade. I’ll be skipping Catalina entirely and moving straight from Mojave to Big Sur.
Score: 16 Votes (Like | Disagree)

FlyGuyDEN
Did anyone else notice the boot chime when they announced Big Sur? Will someone let us know if they're put it back in? I have it re-enabled on my 16" MBP running Catalina.
Score: 9 Votes (Like | Disagree)

tywebb13
Once you download it you can make a bootable USB (at least 16GB, named initially as Untitled) with this command:

It is likely this command will change in beta 2 when it may include the name Big Sur.

Normally Beta 1's are nameless and go with a number. This time the command doesn't have a number either.

talmy
Note this marks the end of OS X. We've now gone to 11.

Unless you've got one of the developers ARM systems, there's nothing to see here but cosmetic changes and revised apps, and those app revisions really could have been done without a new OS.
Score: 7 Votes (Like | Disagree)

Is this a typo?

Wow, you must be one of the very first. Well done. Show a picture in 'Day' mode as well? Are you using it on your primary machine or a secondary one?

My primary machine, but I have it installed on its own drive. I'm going to avoid signing into iCloud on it since it's just for testing right now.