Apple yesterday unveiled iOS 14, the newest version of the operating system designed for the iPhone, and we thought we'd go hands on with the new software to give MacRumors readers a sneak peek at all the features.

Subscribe to the MacRumors YouTube channel for more videos.
iOS 14 brings some useful new interface changes, including a revamped Home screen. Widgets have been redesigned, and for the first time, they can be dragged out of the Today center and placed right on the Home screen among your apps. 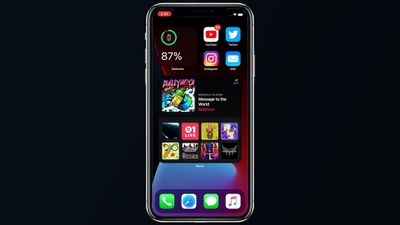 You can choose which widgets you want to use, which app page you want them on, and how big the widget should be, which makes ‌widgets‌ a whole lot more useful because they can be positioned front and center. Up to 10 ‌widgets‌ can be stacked up, and there's even a Smart Stack widget that will automatically display an appropriate widget based on ‌iPhone‌ usage and time of day.

Along with ‌widgets‌, app pages can be hidden from the Home screen for a cleaner and more customizable look. All of your apps are still accessible thanks to a new App Library feature, which may be one of the best improvements in the update. Swipe all the way to the from right to left on the ‌iPhone‌ to see all of your apps organized into neat little folders.

You can search to find an app here, tap on a folder to see its entire contents, or check out the Suggestions folder where Apple makes app recommendations based on usage habits.

Siri in iOS 14 is smarter and can access more data sources to provide better answers to complex questions, but even better, ‌Siri‌ no longer takes up the entire ‌iPhone‌ display when activated.

There's an animated ‌Siri‌ icon that pops up at the bottom of the ‌iPhone‌ when you summon ‌Siri‌, and most ‌Siri‌ results also show up in smaller banners at the top of the screen, no longer interrupting what you're doing on your ‌iPhone‌. Ask for the weather, for example, and it shows up in a small, dismissible banner.

Apple also made another major quality of life improvement that users have been wanting for years now, and phone calls, FaceTime calls, VoIP calls, and more now show up as banners and don't take over the whole screen.

The Maps app received a major overhaul with cycling directions for bike riders and commuters. It features bike paths, lanes, and bike friendly roads, plus info on elevation and incline levels for avoiding stairs. For electric vehicles, there's now an option to create a route that includes charging stations.

Also new to Maps is a Guides feature that allows trusted brands and Apple partners to create guides highlighting notable attractions, places to eat, and more in various cities that you visit. You can create your own Guides too - it's the same as Collections from iOS 13, just with a new name.

The Weather app includes some features from Dark Sky, the app that Apple purchased back in March. It adds info on severe weather events, a next-hour precipitation chart, and minute-by-minute precipitation readings when rain is forecast, which is limited to the U.S. for now.

Apple added some great new features to the Messages app, many of which enhance group chats. Up to nine important conversations can be pinned to the top of Messages so you can keep an eye on the chats that matter most, and there's a new inline reply feature that lets you reply to a specific message in a standard chat or a group chat.

Mentions in Messages have been added, so if you want to get someone's attention in a group chat, you can @mention them with their name and it'll pop up a notification even if they have the group chat muted because it's noisy. There are also new options for choosing images for groups, with emojis and Memoji icons.

Apple made an improvement to emoji too, adding a much needed search feature. When you bring up the emoji interface there's now a search bar at the top so you can find a specific emoji by keyword.

A brand new Translate app expands on ‌Siri‌'s translate features in iOS 13, allowing you to type or speak text to have it translated to and from 11 languages that include Arabic, Chinese, English, French, German, Italian, Japanese, Korean, Portuguese, Russian, and Spanish.

Languages can be downloaded for on-device translation, and ‌Siri‌ can speak your translations for you. Pop the ‌iPhone‌ into landscape mode and it enters what Apple calls "Conversation Mode." In this mode, the app listens for either of the two languages it's set to, translating between each one so you can have a conversation with someone in another language.

Apple's long rumored Car Key feature was unveiled alongside iOS 14, but it'll ultimately work with devices running iOS 14 and iOS 13. Car Key lets your ‌iPhone‌ or Apple Watch be used in lieu of a physical key to lock, unlock, and start a car using NFC. It has some neat new features like sharing keys over Messages, and in the future, it's going to work without the need to even take your ‌iPhone‌ out of your pocket. Car Key needs to be implemented by car manufacturers and it's coming first to the BMW 5 Series next month.

There are a lot more features in iOS 14, including tons of smaller changes, which we'll be covering in future videos. For more on what's new, you can also check out our iOS 14 roundup, which is in the process of being updated and will include a super detailed look at all of the changes introduced in iOS 14.

Later this week, we'll have separate first look videos available for macOS Big Sur, iPadOS 14, and watchOS 7, so keep an eye out for those.

LeeW
I mean it all looks great, but I just hate to applaud Apple for adding things that should have already been there.
Score: 18 Votes (Like | Disagree)

newyorksole
Phone calls and Siri not taking up the entire screen on my iPhone are such welcome updates. I’m excited to have widgets and the new iMessage updates too.
Score: 14 Votes (Like | Disagree)

I've got no clue what you're talking about. My iCloud mail syncs read status no problem.
Score: 9 Votes (Like | Disagree)

howispangler
Woah thanks for the love! That's my band in the screenshots! ha ha. I've been coming to this page for years! Really cool to see that here. ❤️?
Score: 9 Votes (Like | Disagree)

roland.g
I was excited to see this video. Until I realized it was a landscape video of a device in portrait orientation so there is no way to watch it full screen.
Score: 9 Votes (Like | Disagree)

I've got no clue what you're talking about. My iCloud mail syncs read status no problem.

Apple says iCloud Mail does not support this feature: https://support.apple.com/en-ca/HT203545

You can't have something that Apple says doesn't exist.
Score: 4 Votes (Like | Disagree)
Read All Comments

Sunday January 16, 2022 8:56 am PST by Sami Fathi
Continuing the tradition set with the iPhone 13 Pro, only the highest-end iPhone 14 models will feature Apple's ProMotion display technology, according to a respected display analyst. Ross Young, who on multiple occasions has detailed accurate information about Apple's future products, said in a tweet that ProMotion will not be expanded to the entire iPhone 14 lineup and will remain...
Read Full Article • 72 comments