The long-awaited return of the iPhone SE is finally here! It's not as small as the original version, but it packs modern internals into an iPhone 8 design and comes at a very competitive starting price of $399. 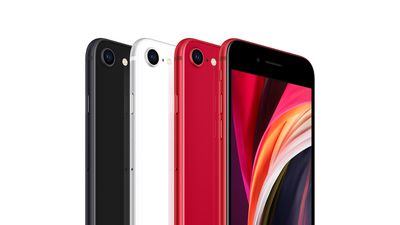 That certainly wasn't the only news from this week, as Apple also began taking orders for the new iPad Pro Magic Keyboard several weeks ahead of its previously announced May launch date, and we saw a number of rumors about Apple's upcoming product pipeline. Apple also began testing a new battery health management feature for its recent notebook models, which will ship as part of macOS 10.15.5.

Read on for those stories and more from a very busy week in Apple news and rumors!

Following nearly a year of rumors, Apple this week finally introduced its second-generation iPhone SE this week with pre-orders available now ahead of an April 24 launch. The device looks similar to the iPhone 8, with a 4.7-inch display and a Touch ID home button, but it has the latest A13 Bionic chip like iPhone 11 models.

Other key features include a 12MP Wide rear camera, up to 256GB of storage, wireless charging, and Wi-Fi 6. Pricing starts at $399 in the United States, with black, white, and (RED) color options, but some carriers and retailers are offering discounts and bonuses.

Following the introduction of the new iPhone SE, Apple has stopped selling the iPhone 8 and iPhone 8 Plus.

Surprise! Apple's new Magic Keyboard for the iPad Pro is now available to order on Apple.com and begins arriving to customers next week.

Apple previously said the keyboard would launch in May, so this early availability was unexpected.

The Magic Keyboard attaches magnetically to iPad Pro with a floating cantilevered design. Like on the 16-inch MacBook Pro, the full-size keyboard has backlit scissor-switch keys with 1mm of key travel. There's also a built-in trackpad to take advantage of trackpad support in iPadOS 13.4.

Rumors continue to suggest that at least two high-end iPhone 12 models will have flat stainless steel edges instead of the current curved design, as well as more sharply rounded corners like those on 2018 iPad Pro models. This could result in iPhone 12 models looking similar to the iPhone 5.

iPhone 12 models are still expected to feature a notch for the front camera and Face ID sensors, but it will likely be reduced in size. Apple's end goal is to remove the notch entirely.

Apple traditionally launches its flagship iPhone lineup in September each year, but there is some uncertainty given the current economic situation, and some analysts have been predicting a staggered launch that could see some models not launch until as late as January 2021.

Apple has seeded the second beta of macOS Catalina 10.15.5 to developers for testing. The update introduces a new "Battery Health Management" feature for all Mac notebooks with Thunderbolt 3 ports.

Battery Health Management is designed to extend the overall lifespan of a Mac notebook by reducing chemical aging. The feature will analyze the health of a Mac's battery and, in some cases, will preserve battery health by not charging a MacBook to full capacity.

When a Mac is used plugged in and the battery is kept full for the most part, the Battery Health Management feature will kick in and it will stop short of a full charge, although battery life may still be listed as 100%.

The launch of a new high-end 12.9-inch iPad Pro with a Mini-LED display may be "delayed" until early 2021 due to the device's "complex panel design," analyst Jeff Pu said in a research note this week.

Back in December, analyst Ming-Chi Kuo said Apple was developing up to six Mini-LED products, including a 12.9-inch iPad Pro with an A14X chip for release in the third quarter of 2020. This was before the global health crisis began, however, so it would be understandable if the timeframe has been pushed back due to supply chain disruptions and Apple engineers working from home.

Wait few minutes and apple zealots will come and tell you there is no way seeing pixels on those epic retina screens;)

At my age I'm lucky if I can clearly see the screen, much less the pixels;)
Score: 5 Votes (Like | Disagree)

calzon65
I've been holding on to my iPhone 6s for years and purchased the SE the moment it became available. I'm unhappy to loose my analog audio jack BUT considering all the other upgrades and great value of the new SE, I know I will be pleased.

TalkAboutApple
SE will replace my 8. After these years it still feels a bit on the large side for me...ideally I'd keep the 4.7" but shrink the bezels.
Score: 1 Votes (Like | Disagree)

Patriks7
Interesting that mini-LED could be a 12.9" iPad feature only. So it is going to be an iPad Pro Pro? iPad Pro Max? iPad Pro Plus?
Score: 1 Votes (Like | Disagree)

Wait few minutes and apple zealots will come and tell you there is no way seeing pixels on those epic retina screens;)

they just out themselves as having low resolution vision
Score: 1 Votes (Like | Disagree)
Read All Comments

Monday November 28, 2022 10:42 am PST by Juli Clover
Apple has cut back on its Twitter advertising, according to Twitter CEO Elon Musk. In a tweet, Musk said that Apple has "mostly stopped" its Twitter ads, asking if Apple hates "free speech." Musk went on to publish a poll asking if Apple should "publish all censorship actions" taken that impact customers and he began retweeting content from companies that Apple has had moderation discussions ...
Read Full Article • 1334 comments