iPhone SE Supports WiFi 6 and Express Cards, But No U1 Chip Included

Apple's new iPhone SE is essentially an iPhone 8 with some updated hardware that brings it in line with the iPhone 11, 11 Pro and 11 Pro Max. Along with an A13 chip, the ‌iPhone‌ 8 has a few other notable hardware upgrades worth noting. 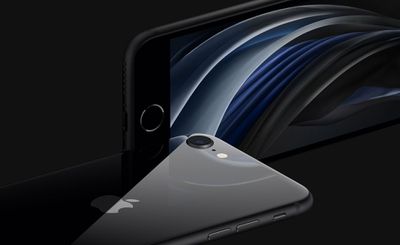 WiFi 6 is the latest WiFi protocol, and it allows for download speeds up to 38 percent faster than WiFi 5 (802.11ac). WiFi 6 has not been widely adopted as of yet, but addition of WiFi 6 will become increasingly important over the next few years as routers and modems begin implementing support.

The ‌iPhone SE‌ also supports NFC with reader mode as all modern iPhones do, plus Express Cards with power reserve. This feature, also included in the ‌iPhone 11‌ and 11 Pro, allows for authentication of Express Transit cards even when an ‌iPhone‌'s battery is exhausted. It will also be a useful feature for the "CarKey" function that Apple has in the works, which will let an ‌iPhone‌ serve as an alternative to a traditional car key in vehicles that support the feature.

Though the ‌iPhone SE‌ shares many connectivity features with Apple's flagship iPhones, it does not include the U1 chip that enables Ultra Wideband technology for improved spatial awareness.

The U1 chip, which is in the ‌iPhone 11‌ and 11 Pro, allows iPhones to precisely locate other U1-equipped Apple devices, making it easier to locate missing devices indoors. Ultra Wideband has been described by Apple as "GPS at the scale of the living room," and it is believed to be a key feature of the AirTags that Apple is developing.

‌AirTags‌ are Bluetooth trackers much like Tile, and will attach to items like keys and wallets to allow them to be found in the Find My app on ‌iPhone‌, iPad, and Mac. ‌AirTags‌ will be locatable through standard Bluetooth, but it is believed they will have U1 support and tracking could be more accurate with devices equipped with a U1 chip.

At this time, the U1 chip is limited to Apple's flagship iPhones, and there have been two new devices released without it - the iPad Pro and now, the ‌iPhone SE‌.

I think the new SE will be a success, especially with people tired of seeing $1,000+ smartphones.
Score: 26 Votes (Like | Disagree)

kiensoy
Too bad the new iPhone SE doesn't have a dazzling display of common sense like the previous iPhone SE/5.

decypher44
I’m honestly considering a step down. I’ve always been one to get the flagship, plus-sized phones. But now that I have the iPad Pro, and prices being what they are, the SE is actually looking pretty good. Not a whole lot I’d be missing out on. Maybe screen quality.
Score: 13 Votes (Like | Disagree)

NickName99
The timing really couldn’t be better. Stimulus checks are on the way, money is tight for a lot of folks but they may still need a newer phone. (Especially if their current phone broke or something)
Score: 10 Votes (Like | Disagree)

1. U1 chip is too expensive for now to include universally (partially flawed opinion due to the high cost of iPad Pro)
2. U1 chip (and the Tile counterpart) are not being used or exploited to the level Apple would have hoped and therefore not worth including until next upgrade cycles

We're going to see another SE in 3 years, another iPad Pro in 12-18 months and by then the iPhone 12 Pro will be out. It'd be amazing if the iPad 12 gets U1 again but still no other products with the chip.

I thought Tile clone relied on U1 or at least that's the opinion of the Mac-Pundits.

The U1 inclusion can't be that expensive relative to an iPad Pro to include.

I suspect 95% of buyers don't know what U1 is and wouldn't care much anyway.

It's definitely not something I'd be looking for in a low cost SE.
Score: 9 Votes (Like | Disagree)

Friday May 27, 2022 2:15 pm PDT by Juli Clover
There's just over a week to go until the 2022 Worldwide Developers Conference, which is one of the biggest Apple events of the year. We've heard surprisingly little about iOS 16 this year, so we're in for some major surprises when June 6 rolls around. As we wait for the keynote event, we thought we'd share some iOS 16 wishlist items from MacRumors readers, because who knows? We just might...
Read Full Article • 238 comments