In order to house the bigger 6.7-inch OLED screen, the device will be slightly wider and taller, and the bezels have been shaved to an impressive 1.55mm, compared to 2.52mm on the 6.5-inch iPhone 11 Pro Max.

They also mirror rumors that the new ‌iPhone 12 Pro Max‌ will have a thickness of 7.4mm, which would be quite a bit thinner than the 8.1mm thick ‌iPhone 11 Pro Max‌. However, the camera bump is said to be slightly thicker, 1.26mm rather than 1.21mm, although the cameras themselves don't protrude as much. 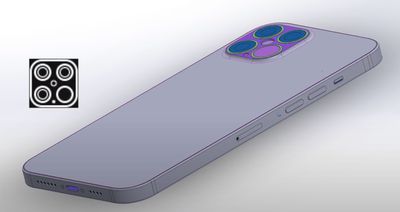 One oddity in the designs is that the size of the notch is the same as the one found on Apple's current ‌iPhone‌ lineup. Previous rumors suggest Apple has designed a smaller notch, although Weinbach claims that these details weren't finalized when the CAD was made, which is a genuine possibility.

Other key takeaways from the video:

Weinbach has accurately revealed a new ‌iPhone‌ color in the past, and has previously claimed that the iPhone 12 in Navy Blue could replace the Midnight Green finish available for ‌iPhone‌ 11 Pro models.

Weinbach also accurately predicted that the volume HUD would become less obtrusive in iOS 13, but he has also shared several Apple-related rumors that did not pan out, including the iPad getting a native Calculator app in iOS 13 and the HomePod launching in Austria and Italy within 2019. Weinbach has a more established track record with Android-related rumors, but this could be set to change.

bbzzz
silly having a camera bump, may as well make the phone that thickness all over and have even more battery
Score: 39 Votes (Like | Disagree)

Although would prefer a slightly thicker phone with more battery.
Score: 31 Votes (Like | Disagree)

B4U
So the Arnold case will finally look movie-correct instead of missing one of the launcher?


I already cannot wait, the iPhone 5 design is still my favorite design when it comes to the grip. Totally a first world problem but I am also looking forward to that additional camera that I will probably never use, just to have the cameras properly aligned again. I hope i will be still able to afford it by the time it comes out lol

I also welcome that the power button is a little further down. I ALWAYS press it by mistake when i want to change the volume
Score: 14 Votes (Like | Disagree)
Read All Comments