The new iPhone SE is now available to pre-order from Apple in the United States and more than 40 other countries and regions. Pricing starts at $399 for 64GB of storage, with 128GB and 256GB options available for $449 and $549 respectively. The first deliveries to customers and in-store availability at select resellers will begin Friday, April 24. 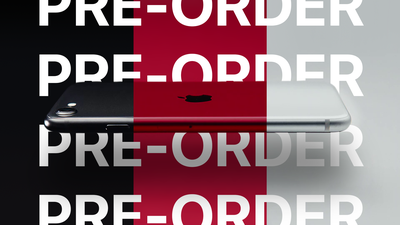 The second-generation iPhone SE has a similar design as the iPhone 8, including a 4.7-inch display and a Touch ID home button, but it has a faster A13 Bionic chip. Other features of the device include a single-lens 12-megapixel Wide rear camera with Portrait mode support, wireless charging, IP67-rated water resistance, and Wi-Fi 6.

The new iPhone SE is available to pre-order on Apple.com and in the Apple Store app in black, white, or (PRODUCT)RED. Customers can get 3% Daily Cash when they buy the device from Apple using the Apple Card.

This is going to be a successful product for Apple, especially for people tired of $1,000+ smart phones.
Score: 30 Votes (Like | Disagree)

It is not the right SE replacement and as a result, Apple will be losing money for its mistake.

It will be a bestseller and a huge financial success.
Let's talk again in 6-12 months.
Score: 20 Votes (Like | Disagree)

corinhorn
Just ordered a 256GB white. This will be my first smart phone. I'm pregnant with anticipation.
Score: 14 Votes (Like | Disagree)

Just ordered a 256GB white. This will be my first smart phone. I'm pregnant with anticipation.

Congrats on your upcoming addition. Just a though though... not criticizing per se... more of an observation... Anticipation is a terrible name for a child. It will be picked on mercilessly. :D
Score: 14 Votes (Like | Disagree)

This is going to be a successful product for Apple, especially for people tired of $1,000+ smart phones.

I've only had one iPhone (the original SE), and there's no way on Earth my finances could stretch to anything from the more expensive range. The new SE is really the only option for me, even though I know there are some compromises.

It's good that Apple offer a way in for folks with limited finances like me. I've ordered mine.
Score: 13 Votes (Like | Disagree)

Freida
Please don't even go there! Its 2020 and we are happy that Apple is finally making 64gb standard. Don't give them ideas its ok to go back to 16gb or this whole forum will eat you alive including myself :)

I know this sounds crazy but I was hoping for a 16gb model for $299.
My work iPhone only needs a few apps.

Friday May 7, 2021 6:55 am PDT by Sami Fathi
According to Apple leaker Jon Prosser, Apple's upcoming release of the MacBook Air will feature various colors, similar to the colors in the newly released 24-inch iMac. In the latest video of his YouTube channel Front Page Tech, Prosser says the same source who accurately provided him information on the first Apple silicon iMac coming in colors has told him that he recently saw a prototype...
Read Full Article • 361 comments

Monday May 10, 2021 10:41 am PDT by Juli Clover
Apple's upcoming iPhone 13 models will be slightly thicker than the iPhone 12 models and will also feature larger, thicker camera bumps with lenses that protrude less, according to iPhone 13 schematics seen by MacRumors. The new iPhone 13 and 13 Pro models are expected to feature a thickness of 7.57mm, up from 7.4mm in the iPhone 12 models. That's an increase of 0.17mm, which won't be hugely ...
Read Full Article • 190 comments