Apple today announced the second-generation iPhone SE with a 4.7-inch display, A13 Bionic chip, Touch ID home button, up to 256GB of storage, and more. 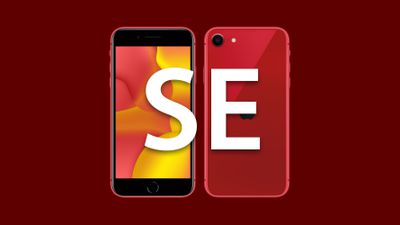 The new iPhone SE sports a single-lens 12-megapixel wide-angle camera with Portrait mode support. With a glass-backed design like the iPhone 8, the new iPhone SE is also capable of Qi-certified wireless charging.

The new iPhone SE comes in black, white and (PRODUCT)RED and will be available for pre-order beginning at 5 a.m. Pacific Time on Friday, April 17. The device will also be available for purchase at select Apple Authorized Resellers and carriers starting Friday, April 24 in the United States and more than 40 other countries and regions.

Pricing starts at $399 in the United States with 64GB of storage, with 128GB and 256GB options available for $449 and $549 respectively. Given this price point, the new iPhone SE has some tradeoffs, including an LCD display instead of OLED, an aluminum frame over stainless steel, Touch ID instead of Face ID, and a single rear camera lens rather than multiple.

Other features of the new iPhone SE include a 7-megapixel front camera, IP67-rated water resistance, Wi-Fi 6, and similar battery life as the iPhone 8. And unlike the original iPhone SE, there is no headphone jack.

The first iPhone SE was a hit with many customers who loved its unique combination of small size, high-end performance and affordable price; the new second-generation iPhone SE builds on that great idea and improves on it in every way — including our best-ever single-camera system for great photos and videos — while still being very affordable. iPhone SE features the industry-leading performance of A13 Bionic that enables great battery life, takes stunning Portrait mode and Smart HDR photos, shoots amazing videos with stereo audio, is great for games and super fast web surfing, and is built with the same industry-leading security features our customers expect. We can't wait to get iPhone SE into customers' hands.

The new iPhone SE comes with a 5W power adapter, Lightning to USB cable, and EarPods with a Lightning connector in the box.

tubular
I'll stick with my SE.
Score: 35 Votes (Like | Disagree)

SaxPlayer
So Prosser was right.
Score: 33 Votes (Like | Disagree)