Apple is expected to unveil its first 5G-enabled iPhones in September, but some analysts believe that models with support for ultra-fast mmWave technology will likely launch after sub-6GHz models due to production challenges and the global health crisis. 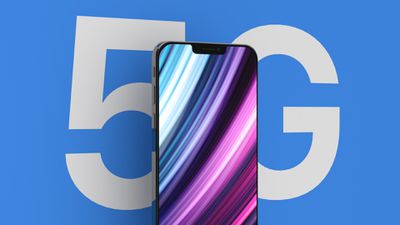 Apple is believed to be designing its own antenna-in-package or "AiP" module for mmWave iPhones, potentially contributing to the staggered rollout.

"Apart from the epidemic, the power consumption of the AiP module may also affect the launch schedule of the mmWave version," analyst Jeff Pu wrote in a research note with Chinese investor firm GF Securities this week, suggesting that Apple's custom antenna-in-package may be more of a drain on battery life than desired.

Likewise, Barclays analysts Blayne Curtis and Thomas O'Malley today said "recent data points" suggest that Apple may not be able to ship mmWave iPhones this year. This lines up with information shared by Susquehanna analyst Mehdi Hosseini, who previously said that mmWave iPhones could launch as late as January 2021.

Prior to the global health crisis, analyst Ming-Chi Kuo said Apple was still on track to release both sub-6GHz and sub-6GHz-plus-mmWave iPhone models simultaneously in the second half of 2020, with shipments beginning in the late third quarter or early fourth quarter. Kuo has not indicated whether those plans have since changed.

Kuo said iPhone models with mmWave would be available in five markets, including the United States, Canada, Japan, Korea, and the United Kingdom, adding that Apple may disable 5G functionality in countries that do not offer 5G service or have a shallow 5G penetration rate to reduce production costs.

As a refresher, mmWave is a set of 5G frequencies that promise ultra-fast speeds at short distances, making it best suited for dense urban areas. By comparison, sub-6GHz 5G is generally slower than mmWave, but the signals travel further, better serving suburban and rural areas.

itsmilo
Don’t really care to be honest. My country still needs to role out LTE nationwide lol and offer unlimited data at reasonable pricing. The whole 10 GB limit for 50 € BS needs to end.

The amount of time I see the edge sign in Germany is just redic.
I mean, I had full LTE in the middle of nowhere in the mountain region of Mexico

Edit: ironically it just took me 3 minutes to send this message because this was shown in the middle of Berlin:

kerplunknet
mmWave is garbage. Do not want for many reasons.

5G phones spread bats. Bats spread COVID via 5G. It's documented. I saw it on Facebook.

So, since Bats spread the 5G virus (this is why Pontiac discontinued the G6), that means.

Yes. You guessed it. The New iPhone is actually the BAT PHONE.

Why would I want a Bat Phone? I'm not a bat. I don't call bats. I don't want to call bats. Who cares if they have a phone?

Of course, none of this changes the fact that I don't have a Mac Pro with the wheelie kit on it.

No. You can keep your batty iPhone to yourself. Besides it's busy battling it's new nemesis.

Cristim74
I find mmWave 5G to be quite useless anyway. You need to be very close and in direct line of sight with the basestation antenna for it to work, and in most cases this is impossible. It's mostly a gimmick. The only real use case for 5G is in the sub-6 bands.
Score: 6 Votes (Like | Disagree)

Electromagnetic radiation travels at the speed of light. The speed doesn't change with the frequency, it's the amount of information that can be carried at the higher frequency that makes the difference.
Score: 4 Votes (Like | Disagree)

ebika
I'm not someone that normally sits on technology as "good enough." However, I can't see a compelling case of why I should care about 5G in my phone. At least in a lot of the US, LTE is fast enough that I rarely find myself wanting faster speeds. Better coverage is usually the primary thing that I'd like to see improve. Is 5G coverage going to be easier to fill in than LTE? Are we expecting the need for discrete wifi networks to decrease in favor of 5G (assuming carriers stop putting stupid caps on it)?
Score: 4 Votes (Like | Disagree)
Read All Comments