The update is available on all eligible devices over-the-air in the Settings app. To access the update, go to Settings --> General --> Software Update. It could potentially take a few minutes for the update to propagate to all users due to high demand.

iOS 11 is a major update that brings a refreshed look and feel to both the iPhone and the iPad. It introduces subtle design changes to interface elements throughout the OS, like bolder text, a new look for apps, revamped icons, and a redesigned usage experience for the Lock screen and the Control Center.

Subscribe to the MacRumors YouTube channel for more videos.
Apple has merged the Lock screen and the Notification Center, so a downwards swipe now brings up the Lock screen and notifications. The Control Center is now customizable and does more, and 3D Touch integration has been expanded. 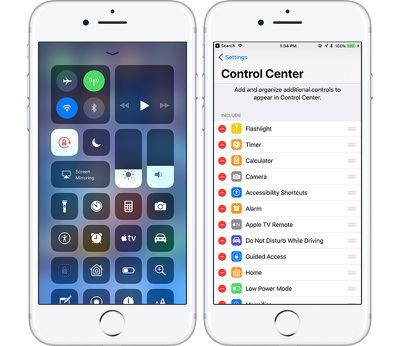 Siri is smarter than ever and has a new, more natural voice, and Siri is now cross-device, letting the personal assistant learn more about you. Siri can also translate English into several different languages like Spanish and Chinese.

iOS 11 feels a lot different on an iPad. There's now a persistent Dock at the bottom of the display that you can bring up anytime with a swipe, and there's a new App Switcher that's similar to Mission Control on the Mac, letting you see all of your apps -- even those in split-view windows -- at a glance. Apple Pencil does more on iPad Pro, and a new Drag and Drop feature lets you drag links, images, files, and more from one app to another.

A new Files app introduces improved file management, and many apps have new features. Notes offers searchable handwriting and document scanning, Maps has lane guidance and speed limit info, Apple Music lets you see what your friends are listening to, and there are a new tools for editing Live Photos.

HomeKit now supports speakers and AirPlay 2 adds multi-room functionality, while Do Not Disturb has been expanded to encompass driving. In a future update, Apple plans to add iCloud Messages and a person-to-person Apple Pay feature.

On the iPad, there's a handy new "Flick" keyboard, while the iPhone has new one-handed keyboard options. You'll see a completely different App Store after installing iOS 11, and a whole host of apps with new capabilities thanks to ARKit and other under-the-hood improvements.

Note: When iOS 11 is installed, all older 32-bit apps will no longer launch. These are apps that have not been updated for several years, and Apple has discontinued support. Only 64-bit apps are compatible with the new update.

For a full rundown on all of the new features you'll find in iOS 11, make sure to check out our iOS 11 roundup and check out the list below for our extended coverage of tips and how-tos. We'll keep updating the list as we publish these articles throughout the remainder of launch day and beyond.

darkarn
Predicted Summary of this Thread:

last_call
I felt a great disturbance in the Force, as if millions of apps suddenly cried out in terror and were suddenly silenced. I fear something terrible has happened.
Score: 20 Votes (Like | Disagree)

ck2875
PSA: Yes. It's normal for your iPhone to get insanely hot after updating. It's doing processor-intense things like re-indexing and re-scanning your Photo library for face data.
Score: 13 Votes (Like | Disagree)

jonblatho
[insert obligatory MacRumors hot take from someone who hasn’t even installed iOS 11 yet here]
Score: 10 Votes (Like | Disagree)

flexiboy1912
Shame its the same as GM as still some bugs , was hoping they might send out a polished version.
Score: 9 Votes (Like | Disagree)
Read All Comments