How to Use Siri's New Translation Feature in iOS 11

iOS 11 brings new functionality to Siri, including a translation feature that allows Siri to translate words and phrases spoken in English to a handful of other languages. Translation is super simple to use, and while the translations aren't always perfect, they get the gist of what you're attempting to say across to someone who speaks another language.

Siri can translate English to Mandarin, French, German, Italian, and Spanish. There's no two-way translation available yet - it's only English to the above listed languages. Apple has said it plans to add additional languages to the Siri translation feature following the release of iOS 11.

Apple appears to be using an in-house translation engine for Siri, as the translations do not match up with translations provided by popular services like Google Translate or Bing Translate. Also of note, while Siri can translate from English to several other languages, the translation features do not work with British, Canadian, or Australian English settings.

Because Siri speaks translations aloud, the translation feature can come in handy when traveling and trying to get simple communications across. It's a simple addition, but one that may go a long way towards making Siri more useful.

Haribokart
Does not translate from British English... what a joke!
Score: 7 Votes (Like | Disagree)

So you mean you can't ask Siri to translate, "Put the torch in the boot?"
Score: 3 Votes (Like | Disagree)

palmerc2
No thanks. I'll continue to use Google Translate.

Similar to Maps, they'll continue to be far behind the features.

Should've struck a deal with Google to implement Google Translate into iOS, as I've never come across a language I couldn't translate - and I've been to a lot of places.
Score: 2 Votes (Like | Disagree)

tbayrgs
So you can have what you want to say translated but will have no idea what the response is since there’s no two way translation. Yeah, that’s brilliant. :rolleyes:
Score: 2 Votes (Like | Disagree) 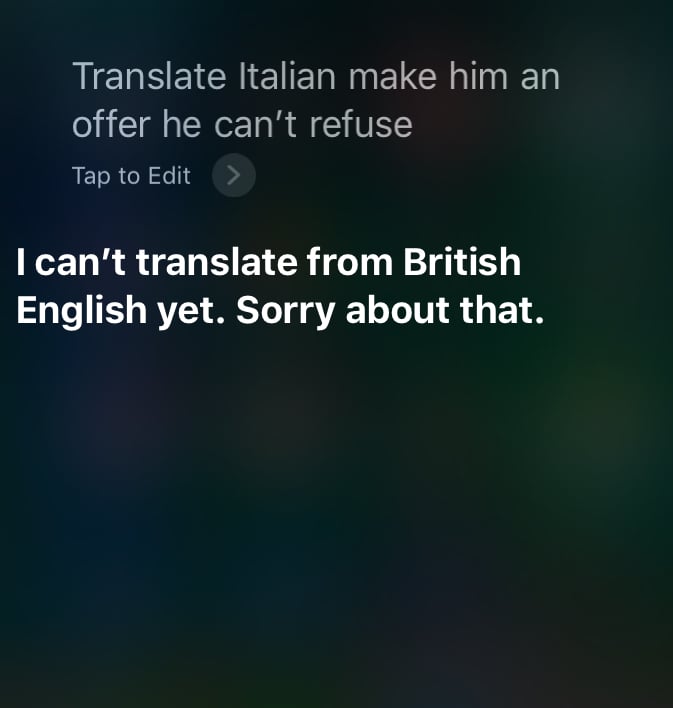 Doesn’t work with Canadian English either!