One new feature in iOS 11 lets you easily record the screen of your iPhone as you navigate around the user interface, which can be useful when trying to help someone remotely troubleshoot an iOS problem or when making videos to share online. Since iOS 11 officially launched to the public yesterday, many users on Twitter and other sites have begun to worry that people will be able to screen record their Snapchats and Instagram Direct messages without notifications warning them of such activities taking place.

While it appears that such is the case for Instagram Direct, Snapchat will still let you know when someone is screen recording your privately messaged snaps. Thanks to a tipster who emailed us this morning, we decided to test out sending both still images and videos through the two previously mentioned apps, and discovered that Snapchat treats iOS 11's screen recording feature just as it does for taking a screenshot. 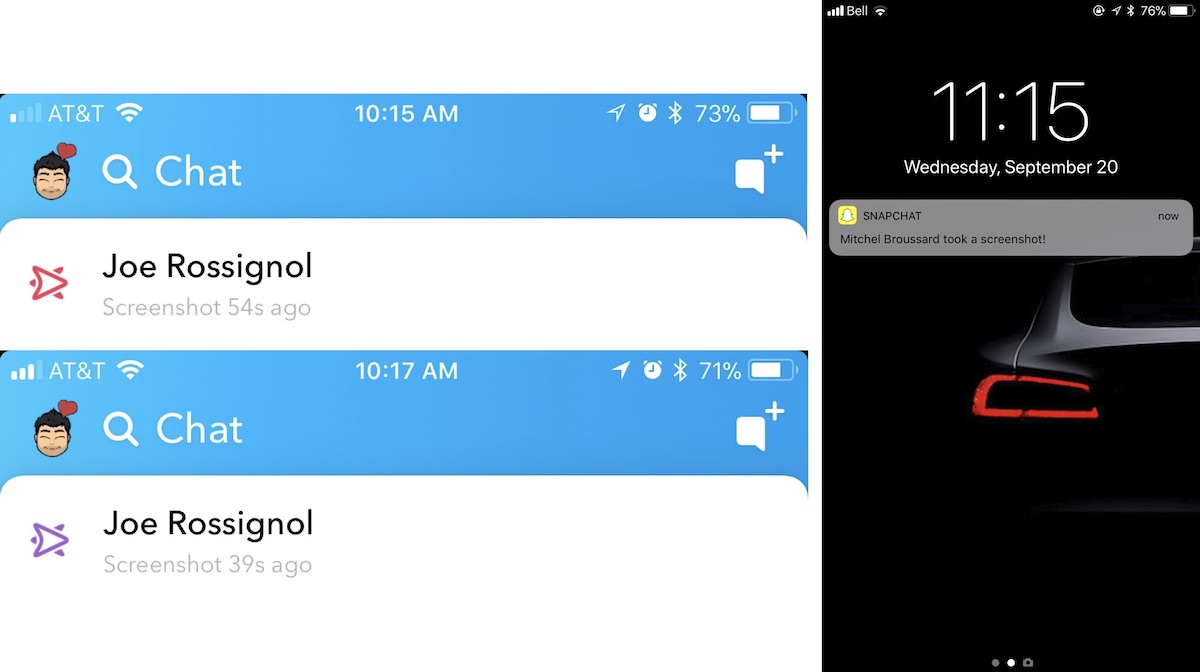 After using screen recording, the sender (left) is shown in-app screenshot icons and the receiver (right) gets notified

If your iPhone is locked, you'll get a push notification saying someone "took a screenshot!" of either your photo or video, and if you're within the app then Snapchat will still display the double-crossed arrows and let you know that the receiver took a "screenshot just now." So, while Snapchat isn't able to directly tell you that it's a screen recording on iOS 11, you'll still know that your DMs are being saved. Stories, on the other hand, appear to be less abiding to the screen recording/screenshot notification system, at least for now.

Instagram Direct doesn't yet appear to have such a feature for iOS 11 screen recording warnings. Similar to Snapchat, Instagram Direct lets you send disappearing photos and videos to other users, and includes a screenshot notification whenever the recipient captures the content you sent privately.

In tests on iOS 11, neither photos nor videos captured via screen recording in Instagram Direct told the sender that such an action had taken place. If screen recording becomes a bigger issue for these private messaging apps, and others like them, it's likely that developers will begin to implement more direct warning systems for users to look out for.

Take a look at our guide for iOS 11 screen recording to learn more about the new feature, and then check out our complete iOS 11 Roundup for all of the major -- and minor -- additions that were introduced in the new software update.

Has it done this since screen record was added, or has this recently been added to snapchat?


You can almost feel the onset of panic.
Rating: 16 Votes

PhillyAnt
I remember the first time I got caught taking a screenshot of a snapchat. I felt so dirty when I found out the other person was notified of what I did. So. very. dirty... lol
Rating: 8 Votes

I remember the first time I got caught taking a screenshot of a snapchat. I felt so dirty when I found out the other person was notified of what I did. So. very. dirty... lol


You still got them nudes though.
Rating: 3 Votes

I would think airplane mode would make all this redundant.


You wouldn't need snapchat if your phone could turn into an airplane. Man, I want airplane mode!
Rating: 3 Votes

You still got them nudes though.

I remember the first time I got caught taking a screenshot of a snapchat. I felt so dirty when I found out the other person was notified of what I did. So. very. dirty... lol

WBRacing
Still, bit late by then isn't it?
Rating: 1 Votes

tkukoc
There's multiple ways around it still. The coding of their application has some big loopholes. And no I'm not talking about jailbreaking, however that is one way around these notifications. Always that lovely word to the wise...as if we all haven't heard it before but... don't send anything out into cyberspace that you wouldn't want others to see... nothing is actually private.
Rating: 1 Votes

aawil
I would think airplane mode would make all this redundant.
Rating: 1 Votes

tennisproha
What's the point? It's not like you can do anything about it… who you gonna call, the snap police :rolleyes:
Rating: 1 Votes
[ Read All Comments ]