Apple has confirmed that Bluetooth and Wi-Fi are not fully disabled when toggled off in Control Center on iOS 11. 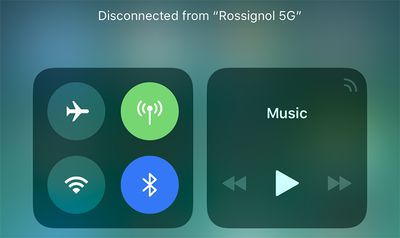 Even when toggled off in Control Center on an iPhone, iPad, or iPod touch running iOS 11 and later, a new support document says Bluetooth and Wi-Fi will continue to be available for AirDrop, AirPlay, Apple Pencil, Apple Watch, Location Services, and Continuity features like Handoff and Instant Hotspot.

Toggling off Bluetooth or Wi-Fi in Control Center only disconnects accessories now, rather than disabling connectivity entirely.

If Bluetooth is turned off, the iOS device can't be connected to any Bluetooth accessories until one of these conditions is met:

While Wi-Fi is disabled, auto-join for any nearby Wi-Fi networks will also be disabled until one of these conditions is met:

Apple made this change in the iOS 11 beta, and it gained more attention after the software was publicly released yesterday.

iOS 11 users can still completely disable Wi-Fi and Bluetooth for all networks and devices by toggling them off in the Settings app.

Apple says users should try to keep Wi-Fi and Bluetooth turned on for the best experience on an iOS device.

djeeyore25
This feature is annoying.
Score: 95 Votes (Like | Disagree)

Moonjumper
The original iPhone famously came without a manual as everything was so obvious. That time is over.
Score: 91 Votes (Like | Disagree)

Mlrollin91
Where did this 5am thing come from? How did they decided on 5am?
Score: 68 Votes (Like | Disagree)

ghostface147
This annoys me. Add a 3D touch option to turn it off. Thanks.
Score: 42 Votes (Like | Disagree)

Geert76
it's all about simplicity, right? :rolleyes:
Score: 37 Votes (Like | Disagree)

Can you press and hold one of the shortcuts to open the full settings page in the Settings app yet?

Nope... that's the annoying part.
I'd really want the previous behavior. This "feature" is completely useless for a "pro" user and I though it was a bug for 8 betas.

Also: why not to put a flag into settings to restore the complete switch off instead of this. Apple, wtf are you doing?!
Score: 36 Votes (Like | Disagree)
Read All Comments