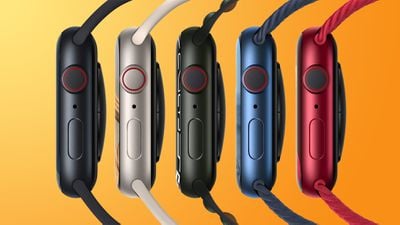 While Starlight critics may be pleased with the return of Silver, Space Gray fans may not be so fortunate with the ‌Apple Watch Series 8‌, with there being no rumors of that particular color shade returning this year.

Apple is rumored to offer the stainless steel ‌Apple Watch Series 8‌ in the same three color options as the Series 7: Gold, Silver, and Graphite – the same selection of stainless steel finishes that the company has now offered for two successive Apple Watch generations.

Like the Apple Watch Edition models from recent years, this new Apple Watch variant is expected to feature a casing made of titanium. Currently, there is no specific information about what color options this high-end Apple Watch could be available in.

The only indication about the device's finish comes from the existing titanium Apple Watch Edition models, which are available in Space Black and natural Titanium, but it is possible that Apple could offer completely different color options for this high-end device.

Color option rumors are typically an area of low accuracy for Apple rumors, likely since color options are chosen relatively late in Apple's product development process. Last year, Max Weinbach and Ukrainian e-commerce website KTC said that the ‌iPhone 13‌ mini and ‌iPhone 13‌ would be available in Black, Blue, Purple, Pink, White, and PRODUCT(RED), while the the iPhone 13 Pro and ‌iPhone 13 Pro‌ Max would be available in Black, Silver, Gold, and Bronze. The Purple, Black, and Bronze color options did not emerge, while the actual new shade of Sierra Blue was largely unexpected.

Corsig
Sucks for me. I liked blue
Score: 10 Votes (Like | Disagree)

mansplains
I sold my stainless series 3 a year ago and am thinking about picking up an 8. Am I in the minority that dislikes starlight and midnight, prefer silver and space grey? We'll see how much the non-aluminum models cost, may grab red if too much $$$.
Score: 9 Votes (Like | Disagree)

The black and natural titanium color options are not enough (Especially for the price we pay). It needs to be expanded.
Score: 8 Votes (Like | Disagree)

TheYayAreaLiving ?
I have a feeling, there is a high possibility that mid-night color may make it to the Apple Watches lineup.
Score: 6 Votes (Like | Disagree)

Arnold Ziffel
Have had Series 0, 4, and now 6. Despite daily wear, have barely gotten a scratch on all of them. Amazing durability for something made of aluminum.
Score: 6 Votes (Like | Disagree)

iDarth_Betar
I just don’t understand why Space Gray still isn’t an option. They’re still offering it on the MBPs. And the MBAs have Midnight, but still offers Space Gray.

Then you have graphite for iPhones. Either keep Space Gray to keep colors consistent across the board, or just do a real Black.