With pre-orders for the Apple Watch Series 7 opening today, dissatisfaction with Apple's new color options has been expressed by some customers and pundits on social media. 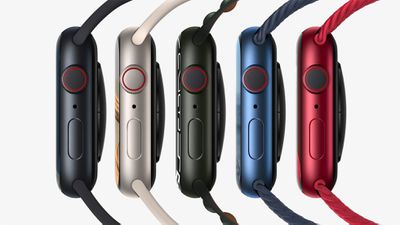 These are the same colors offered with the iPhone 13 mini and ‌iPhone 13‌, except there is a Pink option instead of Green. The new iPad mini is also available in a mix of colors, mirroring Starlight and Pink from the Apple Watch Series 7 and ‌iPhone 13‌, carrying over Space Gray, and introducing a new Purple color.

The Apple Watch's Blue and Red tones have been slightly tweaked from last year's offerings, while Green is a totally new option. Midnight replaces Space Gray with a very dark navy, while Starlight replaces Silver and Gold with a subtle champagne color.

With such significant changes coming to the Apple Watch's color options this year, some customers have expressed confusion and irritation with the new hues. The replacement of Silver and Gold with Starlight has attracted particular ire, with some fans of the previous options being disappointed with the single new champagne-style color. Some fans of Silver have criticized Starlight for being too warm, while some fans of Gold have found it to be too desaturated.

If they made a gold aluminum Apple Watch this year I probably would be ordering one on Friday. Starlight is too silver and stainless steel is too expensive! — Becky Hansmeyer (@bhansmeyer) October 4, 2021

While there are still Silver and Gold stainless steel Apple Watch options this year, Space Black has been replaced by Graphite, except on the Hermés models.

Are there really no non-Hermés Space Black Apple Watch series 7 configurations? But that was my favorite one! I mean, not that I’m getting a Watch this year anyway, but I actually don’t know what I would pick if I were. Apple is making some strange color decisions this year. — Brian "Spooktober" Hough 👻 (@bwhough) October 8, 2021

Stainless steel Link Bracelet users have also noted incongruity with some Series 7 models. This is particularly evident with the Graphite Stainless Steel Apple Watch, which no longer matches its accompanying Link Bracelet.

I hadn’t realized that this year’s Apple Watch is only available in Starlight, not silver. That settles that, then! Not something I’d want to wear at all with my Steel Link band pic.twitter.com/WWKm7Pjdq8 — Steve Troughton-Smith (@stroughtonsmith) October 8, 2021

Other mismatching band and casing combinations have been noted by users across various social media platforms and websites, with some claiming that the Series 7's colors mismatch with more bands, more severely compared to the color options offered in previous years.

There is now an unprecedented level of fragmentation with Apple's color options across its product lines. The ‌iPhone 13‌ and Apple Watch Series 7 now contrast with the iPad Air and AirPods Max models, as well as the 24-inch iMac and iPhone 12, with other devices like the ‌iPad mini‌ overlapping the divide.

I think it’s a pretty popular opinion. Colors are a mess this year. The iPad Mini comes in starlight but not in midnight (still space gray), the iPhone 13 comes in both but the starlight seems to be just white and then the Apple Watch comes in midnight and starlight. — cedric1997 (@PomerleauCedric) October 7, 2021

Apple effectively now has three separate color palettes for its devices, in addition to the pre-existing tonal differences with the same shade that was common to see with the likes of Space Gray. Other product lines, such as the iPad Pro, MacBook Pro, and HomePod mini, also no longer have any matching colors with the aluminum Apple Watch Series 7 or standard ‌iPhone 13‌ models. This appears to have irked some users who like to have matching colors across multiple Apple devices.

As yet, there are no rumors about what colors Apple's redesigned MacBook Pro and Mac mini machines could be available in. When they do arrive, likely at an event later this month, there may be some more clarity about Apple's plans for color options going forward.

4jasontv
Some people are always unhappy.
Score: 67 Votes (Like | Disagree)

Some people are always unhappy.

Having no neutral colors in the midrange models of the line seems like a big oversight, not a picky thing.
Score: 62 Votes (Like | Disagree)

azentropy
Not having a standard silver or space gray/black aluminum model is strange. Starlight is too yellowish/beige and midnight is dark blue. Going to turn off a lot of people.
Score: 42 Votes (Like | Disagree)

sniffies
One of the luckiest numbers, one of the s****est launches
Score: 36 Votes (Like | Disagree)

turbineseaplane
I don't really like any of the Apple colors this year -- on any of the new products..

An exceptionally "meh" round of colors
Score: 34 Votes (Like | Disagree)

james2538
The fact that colors and hues are different across products lines is an embarrassment.

This is not what the Apple of the past 20 years was about. I feel like we’ve gotten closer and closer to the sloppy Apple from the 90s.
Score: 34 Votes (Like | Disagree)
Read All Comments