It came about a month later than in most years, but this week finally saw Apple's media event where it showed off its new iPhone lineup. As expected, we got four new devices in the iPhone 12 and iPhone 12 Pro lineups with staggered release dates, and Apple also showed off the upcoming HomePod, a much smaller and cheaper smart speaker compared to the standard HomePod. 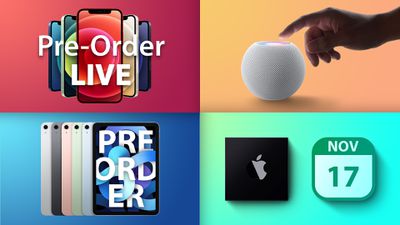 Apple's media event obviously dominated the news this week, including not just the main hardware but also the new MagSafe ecosystem of accessories coming with the iPhone 12. This week also saw the start of pre-orders for the fourth-generation iPad Air, as well as some rumors about a possible Mac-focused event in November, so read on for all of the details!

Everything Announced at the Apple Event in 7 Minutes

Apple this week hosted its second event in as many months, introducing its long-awaited iPhone 12 and iPhone 12 Pro lineup, the all-new HomePod mini, and a collection of MagSafe chargers and accessories that magnetically attach to the back of the new iPhones.

While the event ran for just over an hour, we've condensed everything that Apple announced into a seven-minute video.

Looking ahead, rumors suggest that the first Mac with a custom Apple Silicon processor will be unveiled in November, potentially at yet another event. We're also still waiting on some long-rumored products like a new gaming-focused Apple TV, AirTags item trackers, and AirPods Studio over-ear headphones, but release dates for those things are less certain.

For more detailed coverage of Apple's announcements this week, check out the rest of our top stories below.

This year's flagship iPhones have arrived with the 6.1-inch iPhone 12 Pro and the 6.7-inch iPhone 12 Pro Max, both of which feature a new flat-edge design with slightly slimmer bezels, compatibility with 5G networks, a faster A14 Bionic chip, improved cameras, a LiDAR Scanner for enhanced augmented reality, a new Pacific Blue color, improved durability, and more.

As was rumored, iPhone 12 models ship without EarPods or a charger in the box. Apple touted the environmental benefits of no longer bundling these accessories, noting that the move reduces carbon emissions and avoids the mining and use of rare-earth elements. Removing these accessories has also resulted in iPhone 12 models shipping in a thinner box. EarPods and a power adapter can be purchased separately for a reduced price of $19 each.

Fans of smaller iPhones, rejoice, as the iPhone 12 mini has finally been made official.

With an edge-to-edge Super Retina XDR display, the iPhone 12 mini is a smaller device than the 4.7-inch iPhone 8, despite having a larger 5.4-inch display. The device also features a new flat-edge design for a slightly thinner profile.

Equipped with a dual-lens rear camera system, the iPhone 12 mini's new Wide lens has an ƒ/1.6 aperture, the fastest yet on an iPhone.

All of these features are also available in the larger 6.1-inch iPhone 12, which starts at $799 and is available to pre-order now ahead of an October 23 launch.

Nearly three years after the HomePod launched, the Siri-powered speaker now has a smaller sibling.

To achieve this audio quality, the HomePod mini is equipped with the same S5 chip as the Apple Watch Series 5, allowing the speaker to "analyze the unique characteristics of the music and apply complex tuning models" to optimize loudness, adjust the dynamic range, and more.

The top of the speaker features a backlit touch surface with volume and playback controls, and it glows when ‌Siri‌ is invoked. By placing two ‌HomePod mini‌s in a single room, a stereo pair can be created for a wider soundstage.

Like the existing HomePod, the HomePod mini offers HomeKit smart home capabilities, handing off of audio from an iPhone, multi-user detection, ambient sounds, and compatibility with Apple's new Intercom feature for sending messages to everyone in a household — from one HomePod to another, or to an iPhone, iPad, Apple Watch, AirPods, or vehicle with CarPlay.

HomePod mini will be available in white and space gray for $99, with pre-orders set to begin Friday, November 6.

While not shown during its event, Apple also introduced Beats Flex earphones, an upgraded version of BeatsX for $49.99.

On the back of the iPhone 12 models is a new magnet-based MagSafe system that allows for precise wireless charging and easy-to-attach accessories from Apple and third-party brands like Belkin and PopSocket.

Apple's lineup of MagSafe accessories will include chargers, cases, and even a leather wallet that can hold an Apple Card. Some of these accessories are available to order starting this Friday, with others coming later.

MagSafe was previously the name of Apple's detachable power cable for MacBooks, a feature that was fully discontinued by 2019.

While Apple didn't announce anything about availability of the new iPad Air at its media event on Tuesday, the company did launch pre-orders of the new tablet on Friday alongside the iPhone 12 and iPhone 12 Pro.

Priced starting at $599 for 64GB of storage, the 10.9-inch ‌iPad Air‌ features an edge-to-edge display with a unique Touch ID power button instead of Face ID. Like the new ‌iPhone 12‌ models, the ‌iPad Air‌ uses Apple's new 5-nanometer A14 Bionic chip.

The new ‌iPad Air‌ comes in silver, space gray, rose gold, green, and blue, and it features Apple Pencil 2 support, a 12-megapixel rear camera and a 7-megapixel front-facing camera. Following a week of pre-orders, it will be availabile starting Friday, October 23.

First Mac With Apple Silicon Expected to be Announced in November

The first Mac with a custom Apple Silicon processor will be announced in November, according to Bloomberg's Mark Gurman. While this Mac is expected to be a notebook, rumors have conflicted on whether it will be a new 13-inch MacBook Pro, a new MacBook Air, or a revived 12-inch MacBook.

During its WWDC keynote in June, Apple announced that it will be switching from Intel to its own custom-designed processors for Macs starting later this year, promising industry-leading performance per watt. At the time, Apple said that it plans to ship the first Mac with Apple Silicon by the end of the year and complete the transition in about two years.

Eight unreleased Mac models appeared in regulatory filings earlier this week, lending credence to an upcoming launch. A report from leaker Jon Prosser indicates a Mac-focused event could be held on November 17.

Spock
Ready for a couple HomePod minis and an ARM Mac!
Score: 5 Votes (Like | Disagree)

Caliber26
I wish Apple would’ve made the MagSafe USB-C cable removable/interchangeable. The [integrated] cable that it comes with is only 3-foot long. I’d much rather pair the MagSafe charger with an Anker 6-foot braided USB-C cable that I already own.
Score: 3 Votes (Like | Disagree)

I wish Apple would’ve made the MagSafe USB-C cable removable/interchangeable. The [integrated] cable that it comes with is only 3-foot long. I’d much rather pair the MagSafe charger with an Anker 6-foot braided USB-C cable that I already own.

This is exactly why I’m not buying it. A 3 foot cable is just not going to cut it in my use case.
Score: 2 Votes (Like | Disagree)
Read All Comments