After one round of developer beta testing, Apple unleashed iOS and iPadOS 14 to a wider audience this week, opening it up to members of the public beta program. There are lots of changes and new features to check out, but as with any beta, be careful about installing it on your main devices.

Subscribe to the MacRumors YouTube channel for more videos.
Other major stories this week included our hands-on video with some iPhone 12 dummy units that give a great idea of what the new phones will likely look like, some fresh info on Apple's roadmap for its Mac notebooks as it transitions to Apple Silicon, and some rumors about iPhone 12 pricing.

Check out our video above and read on below for more from this busy week in Apple news and rumors!

Start your downloading! Apple has released the first public betas of iOS 14 and iPadOS 14 for members of its free public beta testing program. Watch our hands-on video of iOS 14 for an overview of all of the new features and changes to check out. 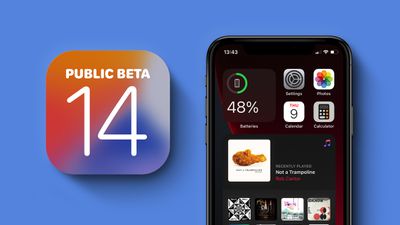 As always, it is recommended that users install beta software on a secondary device if possible, as there is always the potential for bugs, reduced battery life, and other issues during testing. We also recommend backing up your device while it remains on iOS 13.

The first public beta of iOS 14 corresponds with the second developer beta released earlier this week. We've rounded up all of the changes in the second beta, including a home screen widget for the Files app, a slightly redesigned Calendar icon, and more.

Apple is widely expected to announce four new iPhone 12 models later this year, and ahead of time, we got our hands on physical mockups of the devices for a closer look at their design and sizes.

Following in the footsteps of the iPhone 4, all iPhone 12 models are expected to feature a stainless steel frame with flat edges. At the lower end, a 5.4-inch model is expected to be Apple's smallest new iPhone in over four years, with the device slotting between the original 4-inch iPhone SE and the second-generation 4.7-inch iPhone SE in size.

At the other end of the lineup, the 6.7-inch iPhone 12 Pro Max is set to become Apple's largest iPhone ever. While not shown on the dummy model, this device is expected to feature a LiDAR Scanner like the latest iPad Pro for enhanced augmented reality experiences.

Noted analyst Ming-Chi Kuo this week shared his projections for transitioning Apple's Mac notebook lineup from Intel processors to Apple Silicon, starting with the 13-inch MacBook Pro in the fourth quarter of this year.

Kuo says an Apple Silicon-based MacBook Air would come either around the same time or in the first quarter of 2021, and then the MacBook Pro lineup will transition to Mini-LED displays with "all-new form factor" designs in both 14.1-inch and 16-inch sizes in the second or third quarter of next year.

Taiwanese research firm TrendForce is hearing about similar timing for that MacBook Pro transition, saying that Apple suppliers will begin competing to win manufacturing orders for new 14-inch and 16-inch MacBook Pro models with Mini-LED displays in the first quarter of 2021.

Despite multiple reports indicating that Apple will not include EarPods or a wall charger with iPhone 12 models this year, one industry insider believes that pricing will still increase over iPhone 11 models.

In a research note this week, analyst Jeff Pu forecasted that iPhone 12 pricing will start at $749 for the 5.4-inch model, an increase of $50 over the base model ‌iPhone 11, which costs $699. Pu said the price is primarily attributed to the addition of 5G and an OLED display on all ‌iPhone 12‌ models.

Due to 5G, Pu believes that the price increase will be "accepted by consumers" and "will not affect demand," but it's hard not to envision the move being controversial if the EarPods and charger are in fact removed.

Foreshadowing the move, Apple has been surveying recent ‌iPhone‌ buyers to ask about what they've done with the power adapters that came with their previous iPhones. We've also had a look at what is supposedly a redesigned inner tray for the iPhone 12 box with the charger slot removed.

As part of WWDC last month, Apple announced that it will be switching to its own custom-designed processors for Macs starting later this year, and we continue to learn more specific details about this plan.

Shortly after Intel shared details about Thunderbolt 4, launching later this year, Apple has confirmed that it remains committed to the future of Thunderbolt and will support it in upcoming Macs with Apple Silicon.

Thunderbolt 4 won't deliver any increase over the maximum 40 Gb/s available on Thunderbolt 3, but the specification delivers some notable improvements, such as the ability to support docks and other accessories with up to four Thunderbolt 4 ports (one upstream, three downstream).

Originally intended for theatrical release, war movie "Greyhound" has just debuted on Apple TV+. Ahead of the launch, Apple shared an "inside look" at the film, written by and starring Tom Hanks.

Hanks stars as a longtime Navy veteran who is tasked with protecting a convoy of 37 ships carrying thousands of soldiers and much-needed supplies across the treacherous waters of the Atlantic during World War II.

So, given the thinner bezels (as well as slightly larger physical size), how much bigger is the screen on the iPHone 12 Max compared to the iPhone 11/10 Max ?

rb24
hmm, not enough to upgrade. Have cargo pants and want a phablet!
Score: 1 Votes (Like | Disagree)

I had the 6 Plus and 7 Plus but then the iPhone X. Likely will go for the 12 Pro Max rather than 12 Pro as the X has always felt a bit small and the 12 Pro isn’t much bigger than the X. I do wish the 12 Pro Max was a tiny bit smaller as the old Plus size units pushed the limits of what was a comfortable fit in the pocket.
Score: 1 Votes (Like | Disagree)

pdaholic
The only rumor that can be confirmed is that Dan is indeed The Man.
Score: 1 Votes (Like | Disagree)
Read All Comments