Intel today shared some new details on the upcoming launch of Thunderbolt 4, which is set debut later this year.


While Thunderbolt 4 won't deliver any increase over the maximum 40 Gb/s available on Thunderbolt 3, there are some notable improvements such as universal cables up to two meters long without needing to resort to active cables that omit support for slower USB standards as on Thunderbolt 3, the ability to support docks and other accessories with up to four Thunderbolt 4 ports (one upstream, three downstream), and more.

Thunderbolt 4 ports and cables are fully backward and cross-compatible with USB4, Thunderbolt 3, and other USB standards, and it continues to use the USB-C physical connector design. 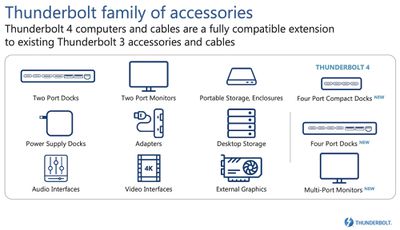 Apple, of course, has just announced that it will be transitioning away from Intel processors to its own Apple Silicon chips across its Mac lineup over the next couple of years, and it remains to be seen how Apple will handle Thunderbolt support going forward. The A12Z-based Mac mini units Apple is distributing to developers to help them prepare their apps for the transition do not include any Thunderbolt 3 ports.

boss.king
That was honestly a terrible video.

He highlighted the USB A port for mouse and keyboard support, then used wireless peripherals that might as well just have used bluetooth.

He mentioned "less cable clutter" while waving his hand over a maze of cables snaking over one another.

At no point does he contextualise the new TB4 specs with what we currently have on TB3 (I get that this is a tech preview, but who actually remembers TB specs off the top of their head?)
Score: 8 Votes (Like | Disagree)

I thought we all just assumed that for Apple Silicon Mac’s they’d use USB 4 which is royalty free. Doesn’t need intel and backward compatible with thunderbolt 3 ect.

Thunderbolt is faster then usb4 now, according to Intel.

idmean
A second port for a wireless mouse and keyboard???

The Windows world is amazing...

Apple Silicon Macs won’t be compatible with eGPU, they said

who is they and where did they say this?
Score: 5 Votes (Like | Disagree)

I thought we all just assumed that for Apple Silicon Mac’s they’d use USB 4 which is royalty free. Doesn’t need intel and backward compatible with thunderbolt 3 ect.

I don’t assume that at all. Apple has been all-in on Thunderbolt, and it’s customers understand that branding. I think you are asking John Q Consumer to take a pretty big leap if they have to start worrying about peripheral compatibility and software compatibility in a single upgrade cycle.
Score: 5 Votes (Like | Disagree)
Read All Comments