Ahead of the launch of new iPhones we often see dummy models created based on leaked schematics and specifications, with those models designed to let case makers create cases for the new devices ahead of their release. We got our hands on a set of dummy models that represent the iPhone 12 lineup, giving us our first close look at the iPhone 4-style design and the different size options.

Subscribe to the MacRumors YouTube channel for more videos.
Dummy models like these often turn out to be accurate, and given that these line up with the glut of rumors that we've had about the 2020 iPhones so far, the dummies are likely to represent what we can expect to see this fall in terms of size and overall body design. 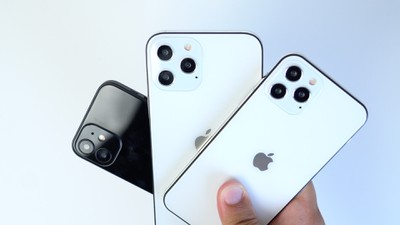 All of the 2020 iPhones are expected to feature a new design that more closely resembles the ‌iPhone‌ 4 or the iPad Pro with a square-edged frame and a front and back glass body, which can be seen in the dummy models. It's a clean, sturdy design that will be a welcome departure from the rounded corners we've had for iPhones since the launch of the ‌iPhone‌ 6.

Original ‌iPhone SE‌ on left, ‌iPhone 12‌ dummy in middle, 2020 ‌iPhone SE‌ on right
Though smaller than the 4.7-inch ‌iPhone‌, it has a larger display because Apple is doing away with the bezels and the Touch ID Home button. All iPhones in 2020 will have full-screen OLED displays with Face ID and minimal bezels.

The 6.1-inch dummy model is larger than the 5.8-inch ‌iPhone 11‌ Pro, as is expected, and it is similar in size to the ‌iPhone 11‌, which was also a 6.1-inch device. Size wise, it's not too far off from existing iPhones, but the feel of the phone in the hand is different because of those flat edges.

The 6.7-inch model is the largest ‌iPhone‌ that Apple has ever released, and it's noticeably bigger than the 6.5-inch iPhone 11 Pro Max. For those who prefer larger displays, the 6.7-inch ‌iPhone‌ will be appealing.

‌iPhone 11 Pro Max‌ and ‌iPhone 12 Pro Max‌ dummy
Apple's two lower-end ‌iPhone‌ models (5.4 and 6.1-inch) are expected to have dual-lens camera setups, while the higher-end models will have triple-lens cameras. There are also rumors that the Pro models could feature the same LiDAR Scanner introduced in the ‌iPad Pro‌.

That LiDAR Scanner is not pictured in these dummy models, and that's because these are designed for case makers. Case makers care about the size of the rear camera bump, but what's in that bump doesn't matter to them.

‌iPhone 12‌ dummies next to ‌iPad Pro‌ camera setup
For that reason, these camera setups are not likely to accurately represent the actual camera modules added in the 2020 iPhones. The same goes for the front-facing camera setup. There have been rumors that the notch will be smaller and that the notch is the same size on these dummies is not necessarily an indication that those rumors are untrue.

There's one other major design change worth noting. There's a new cutout area underneath the power button on some of the dummy models, which is believed to be necessary for the 5G antenna on the devices. All of the 2020 iPhones are expected to support 5G speeds.

For more on what to expect in the 2020 ‌iPhone‌ lineup, including more detailed rumors on colors, camera setups, features, and accessories, make sure to check out our iPhone 12 roundup.

The 6.7 inch phone is probably going to be “heavy”, is what I’m thinking.

There's that word again; "heavy". Why are things so heavy in the iPhone 12? Is there a problem with its gravitational pull?
Score: 35 Votes (Like | Disagree)

Breaking Good
While I don't believe there is a huge demand for small phones, I think there is a strong demand. Some people find a large phone unwieldy to use and others prefer a small phone for portability purposes.

I know the 5.7" isn't as small as the iPhone 5/5S/5c/old SE was, but hopefully it will fit the bill for many of those users who has been holding out in hopes of an update to their favorite.
Score: 12 Votes (Like | Disagree)

SDJim
Bummed that the smallest option is no longer pro :/ I jumped down from the Xs Max to the 11 Pro and have appreciated it being smaller, but wish it were just a little more so to justify the loss of screen size. Maybe "good-enough" features and a nice low price will be enough consolation for me to go 5.4. I really don't want to jump up to 6.1" just to get the Pro features.
Score: 10 Votes (Like | Disagree)

ccsicecoke
Better make it 32:9 screen ratio. Otherwise it's hard to be used as a TV remote
Score: 9 Votes (Like | Disagree)

danny1305
In before the complainers come in to complain about everything
Score: 8 Votes (Like | Disagree)
Read All Comments