Apple today seeded the first public betas of upcoming iOS and iPadOS 14 updates to its public beta testing group, two weeks after first providing the updates to developers after the WWDC keynote and a day after seeding the second developer betas. 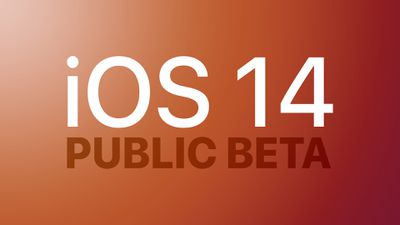 iOS and iPadOS 14 beta 2 introduced a handful of tweaks and changes such as a new Calendar app icon, a Files widget, tweaks to Control Center, and more, with a full list available in our iOS 14 beta 2 tidbits article.

Red Oak
The cadence and quality of these software releases is remarkable, especially given the circumstances

GadgetBen
Most stable iOS in years.

Can't fault it, running the Dev version on my main iPhone.

No issues with apps, (even my bank which is unusual).
Score: 7 Votes (Like | Disagree)

The new customer-facing features are completely broken, dunno what apple expects for the public beta testers to test. Seems like a rushed release.

really they just want people to catch the bugs. It's what testing is for. Also, it's related to the dev beta, which is to focus on developers getting their software up to the latest version.

VictorTango777
After all these years, will users finally be able to sort reminders by name, due date, priority? It seems like Apple engineers never bothered to test the Reminders application with more than one item in a list.
Score: 6 Votes (Like | Disagree)
Read All Comments