Earlier this week, Apple confirmed it will release an all-new Mac Pro in 2019, as a bid of reassurance to its professional customers who have waited over four years for the company's high-end workstation to be updated. 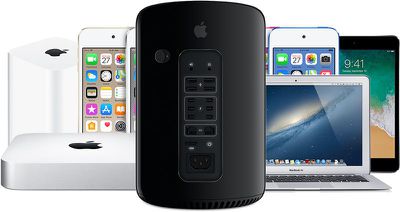 Apple still sells a handful of other major products that haven't been updated in between three and six years, however, and unlike the Mac Pro, it has remained silent about any future updates. We've outlined those products below.

Apple hasn't refreshed its lineup of AirPort base stations in around five to six years. The high-end AirPort Extreme and AirPort Time Capsule, which is an Extreme coupled with up to 3TB of internal storage, were last updated at WWDC 2013. The smaller AirPort Express hasn't been updated since June 2012—it still has old 802.11n Wi-Fi.

The current Mac Pro was previewed at WWDC 2013, when Apple's marketing chief Phil Schiller famously quipped "can't innovate anymore, my ass!" The professional desktop became available to order in December 2013, and hasn't been updated since, beyond receiving a price cut across the line in April 2017.

Apple this week confirmed that it will release an all-new Mac Pro with a modular design in 2019. The computer will be influenced by Apple's new Pro Workflow Team, consisting of creative professionals who are experienced in areas such as visual effects, video editing, 3D animation, and music production.

It's been three-and-a-half years since the Mac mini was last updated as of next week. The portable desktop is still powered by Intel's outdated fourth-generation Core processors, despite the fact that we're on the eighth generation now. It also has Thunderbolt 2 ports, nearly three years after Intel announced Thunderbolt 3.

Apple has twice said the Mac mini remains an "important" part of its product lineup, but unlike the Mac Pro, it hasn't provided a timeline for any future updates. While there has been some speculation that the Mac mini could play a role in Apple's modular Mac Pro system, the fate of the machine remains unclear.

While the base model MacBook Air was updated with a slightly faster 1.8GHz processor in June 2017, the notebook hasn't received a significant update in over three years and counting. The latest MacBook Air is powered by Intel's fifth-generation Core processors—again, we're at eight now—and still lacks a Retina display.

The prevailing assumption has long been that once Apple could manage to sell the 12-inch MacBook for $999, that it would replace the MacBook Air. That has yet to happen, however, and now there's rumors suggesting that a new and possibly even cheaper MacBook Air will be released at some point this year.

Once updated on an annual basis like the iPhone, the iPod touch hasn't been refreshed in nearly three years. The portable media player is powered by an Apple A8 chip, which was already around 10 months old at the time, and it has an 8-megapixel rear-facing camera and up to 128GB of storage.

At this point, the iPod touch is a niche product at Apple. It's also the only remaining iPod available to purchase, after Apple discontinued the iPod nano and iPod shuffle last year. However, considering the iPod touch is a gateway product to the iPhone, it's certainly possible it will eventually be updated.

Apple introduced the iPad mini 4 at its "Hey Siri" event in September 2015, and hasn't updated it since, beyond adjusting storage and pricing in 2016 and again in 2017. Like the latest iPod touch, the tablet is powered by an Apple A8 chip and has up to 128GB of storage, the sole capacity currently sold.

Like many other products on this list, the fate of the iPad mini is unclear. One possibility is that it will be discontinued once the new 9.7-inch iPad gets slimmer bezels, which would make it closer in overall size to the 7.9-inch iPad mini. The new iPad also has a much faster A10 Fusion chip and Apple Pencil support.

zahuh
So funny how when Phil announced the Mac Pro he said “can’t innovate my ass.” Took 5 years for their egos to admit they failed and since SJ isn’t there, they need “market research” instead of a visionary mind to figure out what to do.
Score: 73 Votes (Like | Disagree)

Dilster3k
Do you know what they all have in common? The death of Steve Jobs.

Hate to keep kicking a dead horse. But there is a universe of a difference if you compare the innovation between 2003 to 2008 and 2013 to 2018 (not including 2012 because those were likely supervised under him). Why could they deliver on time and pull off the balancing act back then?
Score: 59 Votes (Like | Disagree)

jent
This is embarrassing. Apple is a great company, and frankly they should be able to provide minor spec bump updates before a major upgrade (not waiting five to six years between them), lower the price as the product line ages significantly, kill off a line so as not to send false signals that it's here to stay, or at least keep the status quo but inform their customers that they'll eventually be phased out. But this current reality of having entire product lines that are five and six years old without even a minor update to increase processor speed, RAM, or hard drive--or a reduction in price, is sad.
Score: 47 Votes (Like | Disagree)

So funny how when Phil announced the Mac Pro he is “can’t innovate my ass.” Took 5 years for their egos to admit they failed and since SJ isn’t there, they need “market research” instead of a visionary mind to figure out what to do.

Do you know what they all have in common? The death of Steve Jobs.

Hate to keep kicking a dead horse. But there is a universe of a difference if you compare the innovation between 2003 to 2008 and 2013 to 2018 (not including 2012 because those were likely supervised under him). Why could do they deliver on time and pull off the balancing act back then?

Totally agree. The change is apparent to me, although I know others will disagree.

Apple has more money to spend than any other company in the world. Yet, they can't churn out new Macs on a regular basis or even a semi-regular basis. Nor can they release a quality update for their MacOS. It is apparent that Apple has become a mobile phone company more than anything else, and they place the majority of their time and attention on iOS, animojis, and things of that nature. And then every 3 to 6 years they say "Oh yeah, we better try to update our Mac hardware..."
Score: 31 Votes (Like | Disagree)

Do you know what they all have in common? The death of Steve Jobs.

Hate to keep kicking a dead horse. But there is a universe of a difference if you compare the innovation between 2003 to 2008 and 2013 to 2018 (not including 2012 because those were likely supervised under him). Why could do they deliver on time and pull off the balancing act back then?

Also because they weren’t making and supporting 14 different SKUs of every product line.

Jobs always believed in one iPhone. This Plus model, the whole 8 vs X being in the same release cycle, and even the myriad of older models still being sold have spread Apple way too thin.

Instead of three more phones this year, Apple should dump two of them and make one successor to the X. Dump the iPhone 6s and 7; and only continue to sell the SE, 8, X, and one current model. Even that is a lot because each one has 2-3 storage SKUs and multiple colors, but it’s still better than the enormous mess of a product lineup they have now.
Score: 29 Votes (Like | Disagree)

camnchar
I have a deep love for 3 of those products: the Time Capsule, the Mac Mini, and the iPad Mini. I've moved on from all 3 because Apple just doesn't care about the segments any more.

Or I guess I should say Apple has moved on from me.
Score: 29 Votes (Like | Disagree)
Read All Comments