Apple today removed the iPod nano and iPod shuffle from its website and online store around the world, and it has since confirmed the iconic portable media players have been discontinued. Apple continues to sell the iPod touch with updated pricing and storage, including a 32GB model for $199 and 128GB model for $299. 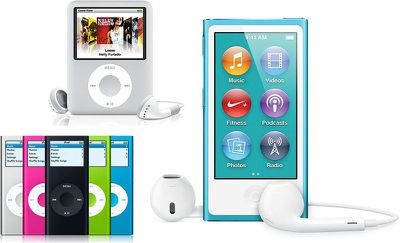 For now, it appears the iPod nano and iPod shuffle are still available to purchase at many Apple Stores and other resellers, but that likely won't be the case for too much longer. In the United States, the latest iPod nano started at $149 with 16GB of storage, while the iPod shuffle cost $49 with 2GB of storage.

iPod sales had been declining for several years. Apple reported 2.6 million iPods sold in the fourth quarter of 2014. Since then, Apple has grouped iPod sales under its "Other Products" category in earnings results. iPod sales peaked at 54.8 million in 2008, compared to 14.3 million in 2014.

The success of the iPod, first introduced in 2001 by the late Steve Jobs, helped Apple reestablish itself as one of the world's most successful technology companies at the turn of the millenium. But, after the iPhone launched in 2007, the iPod nano and iPod shuffle became increasingly niche products.

Update: "Today, we are simplifying our iPod lineup with two models of iPod touch, now with double the capacity starting at just $199, and we are discontinuing the iPod shuffle and iPod nano," an Apple spokesperson told Business Insider.

TSE
Rest in peace iPod. Played a huge role in the early 2000's Apple, and was the first sign of Apple not being a computer company, but a consumer electronics one.
Score: 36 Votes (Like | Disagree)

macduke
I wasn't an Apple user back when the Nano launched, but I remember it was the first Apple product that seriously impressed me and made me want to get Apple Stuff. RIP Nano!

Edit: Remember when analysts were all worried that the iPhone would cannibalize iPod sales? And Steve Jobs said "If you don't cannibalize yourself, someone else will."
Score: 33 Votes (Like | Disagree)

ck2875
Hypothesis: It was easier just to discontinue them than to figure out which shade of "Space Gray" to use in a refresh.
Score: 30 Votes (Like | Disagree)

Appleaker
This is a historic occasion. I hope the iPod Touch stays around and gets refreshed.
Score: 28 Votes (Like | Disagree)

oneMadRssn
End of an era if this is true.
Score: 26 Votes (Like | Disagree)

markfc
Having just upgraded my 60GB iPod Video to a 256GB SD I really wish Apple would release a new iPod with click wheel.

Make it see through and call it the iPod Glass.
Score: 22 Votes (Like | Disagree)
Read All Comments

Wednesday June 29, 2022 5:23 pm PDT by Sami Fathi
The redesigned MacBook Air with the all-new M2 Apple silicon chip will be available for customers starting Friday, July 15, MacRumors has learned from a retail source. The new MacBook Air was announced and previewed during WWDC earlier this month, with Apple stating availability will begin in July. The MacBook Air features a redesigned body that is thinner and lighter than the previous...
Read Full Article • 271 comments