Saturday March 3, 2018 9:35 am PST by Eric Slivka
KGI Securities analyst Ming-Chi Kuo has issued a new research report encouraging investors to keep their eyes on three products for 2018: the rumored 6.1-inch LCD iPhone, AirPods, and a "more affordable MacBook Air." The first two in that list have been widely discussed in recent weeks and months, but this is the first we've heard about an update to the MacBook Air. 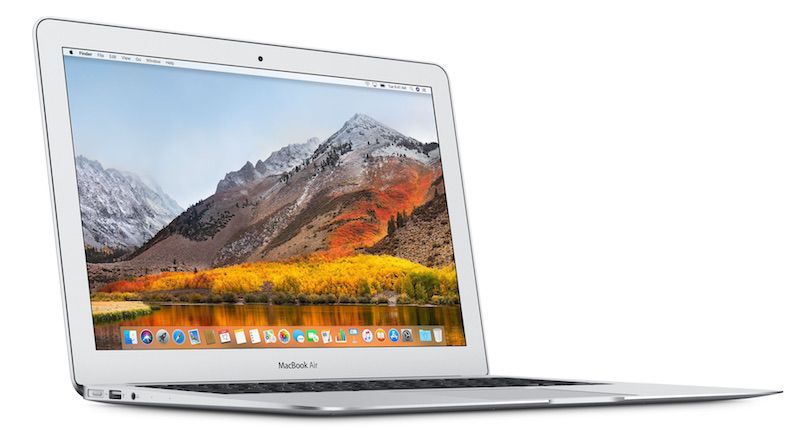 We expect Apple (US) to roll out the new MacBook Air with a lower price tag in 2Q18. We forecast total shipments of MacBook models will grow 10-15% YoY in 2018 (vs. 0-5% YoY decline for the NB industry), up from 15.5-16mn units in 2017. While Quanta, Radiant, Catcher and SZS are likely to benefit from strong shipments momentum, SZS also stands to benefit from increased market share and a higher ASP.

Kuo doesn't offer any details on what to expect in an updated MacBook Air beyond a lower price tag, but the current models are certainly outdated as they haven't had any substantial updates in three years. Since that time, Apple has cut back on available models including a complete discontinuation of the 11-inch model. The only recent upgrade to the 13-inch model has been a bump to the base processor option last June, but it's still a Broadwell chip from the 2014–15 timeframe.

Aside from obvious internal upgrades like processors and graphics, another area that could see improvement is the display, as the MacBook Air currently offers a 1440 x 900 non-Retina display. We'll likely also see some USB-C/Thunderbolt 3 upgrades and perhaps an overall redesign given the age of the current design.

Kuo's claim of a second-quarter introduction points to the April–June timeframe, which could mean an announcement at WWDC in June, and we'll likely hear more rumors as the time gets closer.

Andres Cantu
How can technologies like Thunderbolt 3 push forward if Apple keeps selling products with obsolete technology? And a 900p non-IPS display in 2018?

Just lower the price of the Retina MacBook (they’re on sale all the time, anyway), add a second USB-C port, and be done with it. People buy the Air only for it’s affordability, anyway.

And while they’re at it, update the Mac mini as well.
Rating: 90 Votes

ButteryScrollin
Make the 13 inch MacBook Pro as cheap as the current Air and get Rid of the air.
Rating: 84 Votes

DocMultimedia
I'll be buying so long as they don't make any drastic changes to ports or power cord. Any upgrades in speed/display would be nice. My 2012 is still cruising along.
Rating: 37 Votes

They should just lower the prices of the rMB.
Rating: 37 Votes

Since Steve passed the MacBook range has become increasingly confused and lacking any clear strategy.

chrisherbert
I doubt they will be significant updating the MacBook Air.

Most likely the rumor mill means the MacBook, which certainly will be updated and could stand to be significantly cheaper. At its current price it isn’t a very good value, even by Apple standards. I’ll bet they hope to get it down to $800-$1,000 to make it more appealing to consumers, and so they can finally stop selling those ancient Airs.
Rating: 26 Votes

itsmilo
why keep the Air even around? They got rid of the iPad Air line. Just make the MacBook cheaper.