Monday November 21, 2016 5:47 am PST by Mitchel Broussard
Apple has dissolved its division which develops wireless routers and is now sending engineers who worked on the AirPort lineup into other product teams, including one currently working on Apple TV. The news comes from a report by Bloomberg, who said Apple has been slowly shutting down the division over the past year and made the decision "to try to sharpen the company’s focus on consumer products that generate the bulk of its revenue." 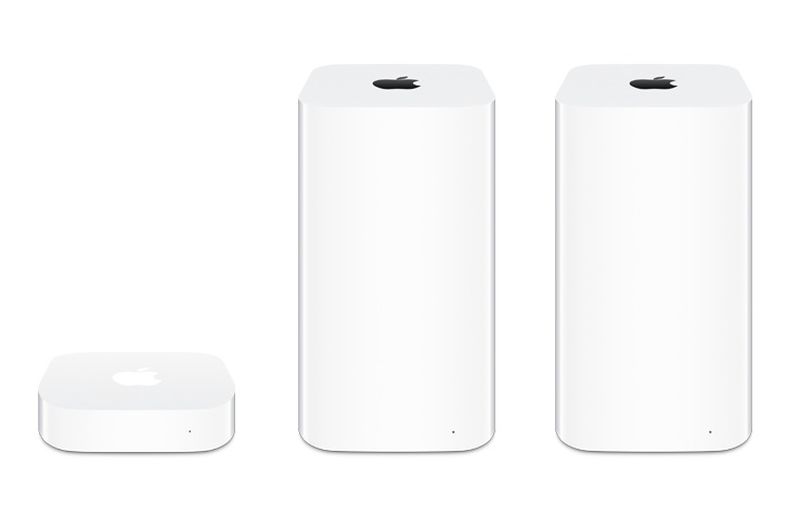 Currently, Apple sells three wireless routers, including the AirPort Express ($99), AirPort Extreme ($199), and AirPort Time Capsule ($299), but none of the devices have seen a refresh since 2013. A temporary stock shortage earlier in the year gave hope that a refresh of the AirPort Extreme and Time Capsule was coming during WWDC, but Apple never mentioned the products during its keynote. The trio of wireless routers still remain available for purchase for the time being.

Exiting the router business could make Apple’s product ecosystem less sticky. Some features of the AirPort routers, including wireless music playback, require an Apple device like an iPhone or Mac computer. If the company no longer sells wireless routers, some may have a reason to use other phones and PCs.

The central reason for abandoning the AirPort line appears to focus mainly on its small revenue gains in comparison to the company's more lucrative products, like the iPhone. Apple includes its routers in the "other products" category of its annual financial results, a section which generated $11.1 billion in fiscal 2016, or about 5 percent of the company's total sales.

The reason why many loyal customers like(d) Apple was the huge convenience factor and reliability within a smart ecosystem.

Supplementary products such as AirPort Time Capsule, the 3rd gen Apple TV, and the Apple Thunderbolt Display surely didn't generate a lot of revenue, but completed the unique Apple experience at home and in the office. If you didn't want to fiddle around with 3rd party support and drivers (like in the PC world), you just bought everything from Apple, and you knew that everything would work smoothly – because it was Apple.

But now things are changing, the convenience factor has been significantly disturbed with the latest #donglelife backlash and ugly LG monitors on top of that. Not to mention the never-the-same Space Gray (gone Jet Black) color-rama-drama.

I beginn to miss a central theme – a leitmotif – across the latest Apple products. The harmony is falling apart. While e.g. Microsoft is currently hard working on just that: unification. Be careful Apple... Nokia was once big too! Don't let the bean counters kill the company we used to love.
Rating: 322 Votes

jtrenthacker
So, in a couple more years, Apple will be nothing more than tablets and phones? Timmy needs to hit the road.
Rating: 259 Votes

sputnikv
i thought wireless was the future
Rating: 145 Votes

Sound214
Wow, this stinks! I've dealt with plenty of router alternatives, and AirPort is by far more superior. And you don't have to hide them, since they're beautiful. ****.
Rating: 141 Votes

I understand why they shut down their display business (though I'm not happy with it) because apart from design, they couldn't really make a difference in the display business.

But the AirPort, and especially the Time Capsule, really made a difference. I've never had a backup system that worked more smoothly and without any maintenance at all than my Time Capsule.

840quadra
With so many employees, a new campus so they can hire more, they can't find 50 - 100 people to support this simple product?

This is quite disappointing, considering they were one of the first in the market with affordable consumer WiFi access points.
Rating: 68 Votes