Wednesday September 9, 2015 11:20 am PDT by Joe Rossignol
Apple today announced the iPad mini 4 at its "Hey Siri" media event in San Francisco. The tablet is virtually a 7.9-inch version of the iPad Air 2 and is 6.1mm in thickness, which is 18% thinner than the previous generation. The tablet also weighs just 0.65 pounds with a 30% faster CPU and 60% faster graphics than the iPad Mini 3. 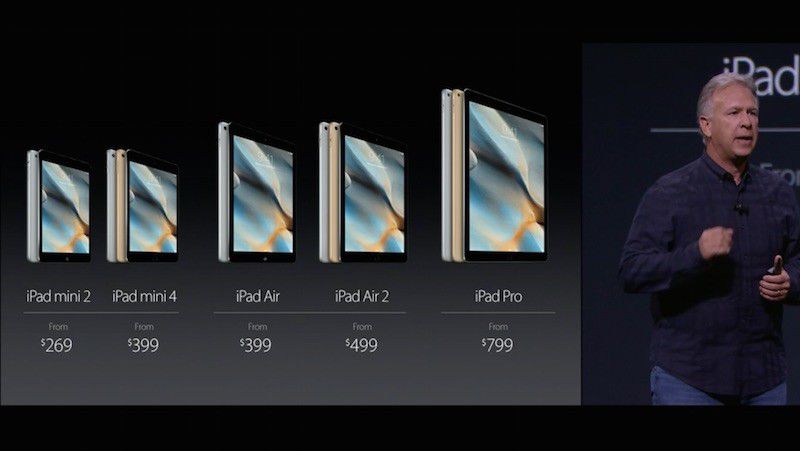 The new tablet also has all of the expected improvements in its camera, with advanced optics, an improved sensor, and an Apple‑designed image signal processor. The iPad Mini 4 includes Touch ID and uses new iOS 9 features like Slide Over, Split View, and Picture in Picture to provide users with a more robust and economical mobile experience.

daneoni
I'm starting to think they have too many products. Should be 1 mini, 1 Air and 1 Pro. This is plain confusing. Similar issue with the MacBook lineup.

Razeus
iPad mini continues to get no love from Apple. None.
Rating: 7 Votes

kazmac
If the resolution & color gamut are fixed, great. I wonder if it also has 2GB of Ram? That would get me to look at it more seriously.
Rating: 4 Votes

twoodcc
but does it have 2GB of RAM?
Rating: 3 Votes

kaiseryeahhh
In the web of apple says an A8 processor not an A8X processor.
1Gb of ram again?
No split view?
Rating: 2 Votes

I'm starting to think they have too many products. Should be 1 mini, 1 Air and 1 Pro. This is plain confusing. Similar issue with the MacBook lineup.

I understand that some people are disappointed or don't feel the need to upgrade since there are no big changes. But that doesn't make the iPad Mini 4 a bad product. It has improved and for people like me who don't have an iPad yet it is an exciting product. I think that the Mini 4 in comparison with the Mini 2 has enough improvements to justify the price gap.

So those improvements made it a no-brainer for me so I pulled the trigger and ordered one right away. :)
Rating: 2 Votes

That's not even the resolution of the current iPad Mini, so why would the new one revert to that?