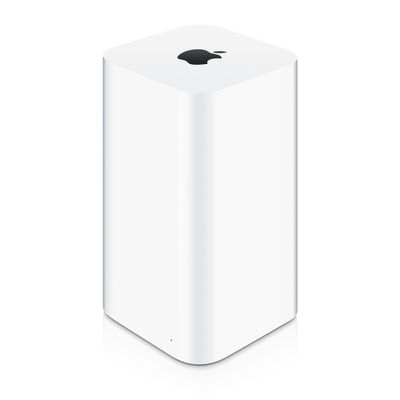 All of the devices feature 802.11ac WiFi, which allows for 40 percent faster data transmissions at the same distance as the previous models. They also feature beamforming, which is electronically steering antenna directions. All of the new products are available for purchase from the Apple Online Store today.

The AirPort Extreme Base Station is priced at $199.

The Time Capsules come in 2TB and 3TB variations and are priced at $299 and $399, respectively.

Apple has released new firmware updates for both the Base Station and the Time Capsule.

Apple has also released an update for the AirPort Utility App for Mac and iOS.

AirPort Utility for iOS can be downloaded from the App Store for free. [Direct Link]

AirPort Utility for Mac can be downloaded from Apple's software update website.

After a time, one simply gets fatigued with all the various sniping negativity. It's fine if you hold an opposing view or wish to lodge a constructive criticism. But, if you're here just to appear that you're clever in your oblique negativity, you're just taking up space and adding nothing to the discussion. Personally, I want Apple to succeed. I have a lot invested in that outcome (my work, not stock). I, too, want Apple to make the best decisions. My approach is to think of myself as a hired contributor with a voice who might hold stock. Sure, offer suggestions. Take a stand on actions you think off-base. But, gosh, minimize the self-centered, whiny protestations which offer no useful advance.
Score: 36 Votes (Like | Disagree)

verniesgarden
I'm going to get the time capsule and paint it like a tardis.
Score: 14 Votes (Like | Disagree)

atari1356
The old Airport Extreme looks too short next to my Ikea lamps. The new tall one will match better.
Score: 13 Votes (Like | Disagree)

No longer cat-proof? Wouldn't be very happy hearing my backup go thump in the night.


The simple answers there are:

There are different DSL protocols, not every provider uses the same ones. That would add complexity and variation.

Not everyone uses DSL. Many use Cable, or FiOS, or other technologies that just give them a Ethernet port to plug in to. Again, adding complexity and variation.

To cover the US alone, if they were to go that route, they'd need to offer at least five different base stations (they'd still have to offer at least one "basic" model, because nobody would want to pay the extra $40+ to add the modem.)

Back when the original "UFO" AirPort base station came out, it made sense to include a dial-up modem. A majority of people were still on dial-up, and dial-up modems were cheap ($10 or less at Apple's bulk cost.) But for a company that makes very few individual models, having DSL/Cable/FiOS modems built in just doesn't make sense. Even Linksys stopped doing that a few years ago.
Score: 12 Votes (Like | Disagree)
Read All Comments