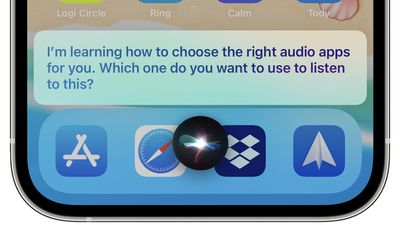 Seems to work about as well as the rest of Siri.
Score: 12 Votes (Like | Disagree)

MallardDuck
We still need a 'I own my music, stop looking at services' option....
Score: 6 Votes (Like | Disagree)

They clearly don’t want to you to set a default player for all your music. So they came up with this. We all know it will never work because Siri and learning are not two words that should ever be used in the same sentence.
Score: 4 Votes (Like | Disagree)

Cory S
Why not just do this by default, but add a submenu for which one to play which type of content by default?

chriscl
It just feels like Apple has begrudgingly added this option.

Why can there not be a simple option to select the default Music service to be used every single time ?

I use Spotify, I don't use any other service. I just want Spotify as the default for all music playback. How Hard can it be?

(and don’t get me started on the lack of native Spotify support on HomePod - but that’s down to Spotify, not Apple).
Score: 3 Votes (Like | Disagree)
Read All Comments