Since the AirPods Pro were released in October 2019, we haven't seen an updated version, but that could change in 2021. Apple is rumored to be working on a new version of the ‌AirPods Pro‌, the ‌AirPods Pro‌ 2, and there could be some design changes in store.

This guide covers everything that we know so far about the ‌AirPods Pro‌ 2. 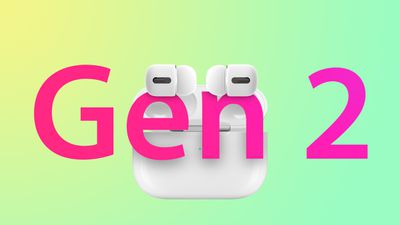 The ‌AirPods Pro‌ already feature a shorter stem than the standard AirPods, but the second-generation version of the AirPods could potentially have no stem at all.

The current ‌AirPods Pro‌
According to Bloomberg, Apple wants to make the ‌AirPods Pro‌ 2 more compact by eliminating the short stem that sticks out from the bottom. Apple is testing a more rounded shape, which would mean the AirPods 2 might look more similar to something like the Google Pixel Buds or the Samsung Galaxy Buds, both of which are stemless.

Apple analyst Ming-Chi Kuo believes the second-generation ‌AirPods Pro‌ will feature support for Apple Lossless audio (ALAC), which would be a major upgrade.

Current AirPods and ‌AirPods Pro‌ models do not support Lossless because AirPods play audio using Bluetooth, and Bluetooth is limited to the AAC codec. Higher quality Apple Lossless Audio files would need to be streamed to the ‌AirPods Pro‌ directly in a way that circumvents Bluetooth, so Apple would need to develop some kind of alternative connection solution.

The next-generation ‌AirPods Pro‌ are expected to be able to play a sound for location tracking purposes. Emitting a sound will let users locate their ‌AirPods Pro‌ if they are lost or misplaced somewhere nearby.

Getting the hardware of the ‌AirPods Pro‌ into a smaller package has proven to be challenging, so there could ultimately be changes to the planned design.

Apple is reportedly finding it difficult to integrate ‌AirPods Pro‌ features, antennas, and microphones into a chassis that's reduced in size.

Sketchy images said to be of the next-generation ‌AirPods Pro‌ depict a charging case with speaker holes on the bottom, and a spot for a lanyard at the side. The speaker holes are allegedly for a Find My feature that will allow the case to be locatable even when the AirPods aren't inside, with the case able to play a sound when lost.

The AirPods in the images do not have a stemless design as has been rumored, and the source that supplied the images said that the AirPods will not have the stemless design. The person that provided the images to MacRumors said they were from an "Apple internal source," but they can't be verified and should be viewed with some skepticism at this time.

Aside from the design changes and the new sensors, the ‌AirPods Pro‌ 2 are expected to be identical to the current version of the ‌AirPods Pro‌, and we haven't heard rumors of new features.

The ‌AirPods Pro‌ 2 are not expected to feature a USB-C port, with Apple instead opting for Lightning for this year's refresh. The USB-C design revision will be implemented in 2023 or beyond.

The ‌AirPods Pro‌ 2 are expected to see a 2022 launch, with the earbuds likely set to debut in the fall alongside new iPhones.

Tuesday May 24, 2022 1:01 am PDT by Sami Fathi
As Apple reportedly plans to switch the iPhone 15 and a number of its accessories to USB-C in the coming years, the upcoming second-generation AirPods Pro charging case will continue to feature a Lightning port, reliable Apple analyst Ming-Chi Kuo said today. In a series of tweets, Kuo reiterated his past remarks that the second-generation AirPods Pro will launch in the second half of this...
Read Full Article • 130 comments

Sunday January 23, 2022 9:32 am PST by Juli Clover
Apple is working on a number of new products that are set to launch this fall, and Bloomberg's Mark Gurman says that it will be "the widest array" of new devices that Apple has introduced in its history. In his latest "Power On" newsletter, Gurman explains that Apple is working on four new flagship iPhones (iPhone 14, iPhone 14 Max, iPhone 14 Pro, and iPhone 14 Pro Max), an updated low-end Ma...
Read Full Article • 288 comments

Thursday January 6, 2022 11:56 pm PST by Sami Fathi
The second-generation AirPods Pro are widely expected to launch in the second half of this year. In preparation for the launch, Apple's suppliers are getting ready for shipments of the new high-end AirPods, according to a new report from DigiTimes. The new second-generation AirPods Pro are widely expected to feature a new design, improved audio, the ability to play back Apple Music lossless...
Read Full Article • 42 comments

Sunday January 2, 2022 2:23 am PST by Hartley Charlton
Apple's second-generation AirPods Pro will feature support for Lossless audio and a charging case that can emit a sound for location tracking purposes, according to Apple analyst Ming-Chi Kuo. In a note to investors, seen by MacRumors, Kuo explained that the second-generation AirPods Pro will feature new selling points that will lead to strong demand, including support for Apple Lossless...
Read Full Article • 167 comments

Tuesday January 26, 2021 7:24 am PST by Joe Rossignol
Apple plans to release second-generation AirPods Pro within the first half of 2021, according to unnamed industry sources cited by Taiwanese publication DigiTimes in a report focused on flash memory supplier Winbond. From the report:Winbond is also expected to be among the NOR flash suppliers for Apple's next-generation AirPods Pro slated for launch later in the first half of this year, the...
Read Full Article • 53 comments

Tuesday December 29, 2020 8:55 am PST by Juli Clover
Leaker Mr-white, who has in the past shared accurate details on Apple's product plans, today tweeted alleged images of internal hardware that will be used in the second-generation AirPods Pro earbuds expected to be released sometime in 2021. In the photos below, the hardware on the right side of the image appears to be current AirPods Pro hardware, while the hardware on the left is designed...
Read Full Article • 77 comments

Monday October 26, 2020 3:34 am PDT by Tim Hardwick
Apple plans to update its AirPods line next year with two new models including third-generation AirPods and second-generation AirPods Pro, according to a new report from Bloomberg. The Cupertino, California-based technology giant is working on two new models: third-generation entry-level AirPods and the second version of the AirPods Pro earbuds, according to people familiar with the plans. ...
Read Full Article • 81 comments

Wednesday July 22, 2020 2:32 am PDT by Tim Hardwick
Apple will launch a next-generation version of AirPods Pro in the second half of next year, according to a new report today. According to DigiTimes' sources, at least some of the next-gen AirPods Pro models will be assembled by Inventec Appliances in Vietnam, with current generation AirPods Pro manufacturers Luxshare and GoerTek also taking a share. Apple analyst Ming-Chi Kuo, who often...
Read Full Article • 54 comments