This week saw Apple news on both the software and hardware fronts, as the company released iOS 15.6, macOS 12.5, and related operating system updates while we also got our first good looks inside the brand-new M2 MacBook Air. 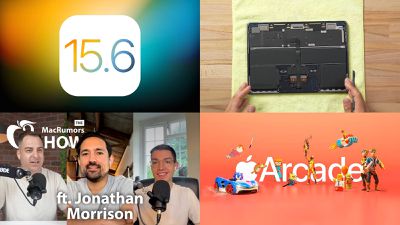 Other Apple news this week included the first major batch of Apple Arcade games leaving the service in the near future, while Jonathan Morrison joined us on this week's episode of "The MacRumors Show" podcast, so read on below for details on these stories and more!

Apple this week released iOS 15.6 with a handful of new features and bug fixes for the iPhone. In the TV app, for example, it is now possible to restart a live sports game that is already in progress.

We've put together a list of everything new in iOS 15.6, so be sure to check that out after updating your iPhone.

Apple has also released iPadOS 15.6 with a fix for an iPad mini 6 charging issue, macOS 12.5 with the same live sports enhancements, watchOS 8.7, tvOS 15.6, and HomePod software version 15.6 with support for Siri in two additional languages and more.

Following the launch of the new MacBook Air, both iFixit and YouTube channel Max Tech have completed a teardown of the notebook.

iFixit discovered that the new MacBook Air is equipped with an accelerometer for reasons unclear, along with battery pull tabs and more.

Max Tech provided a look at the M2 chip, single NAND storage chip for the 256GB model, and some other logic board components.

YouTube creator Jonathan Morrison joined us on the latest episode of "The MacRumors Show" podcast to take a deep dive into Apple's audio technologies, including Spatial Audio and Dolby Atmos.

Listen to "The MacRumors Show" via Apple Podcasts, Spotify, Overcast, Pocket Casts, Castro, or wherever you get your podcasts from. You can also watch a video version of the podcast on our YouTube channel.

Apple is working on a new Mac Pro with an M2 "Extreme" chip, according to a recent report from well-connected Bloomberg reporter Mark Gurman.

Gurman said the new Mac Pro will include ‌"M2‌ Ultra" and ‌"M2‌ Extreme" chip options. At present, the M1 Ultra in the Mac Studio is Apple's most powerful chip available, featuring a 20-core CPU and up to a 64-core GPU, along with a 32-core Neural Engine for machine learning.

Launched in 2017, the iPhone X was a major evolution of the iPhone, with new features like Face ID, an OLED display, wireless charging, and more.

Apple recently shared a list of 15 games that will be removed from Apple Arcade soon due to the upcoming expiry of some three-year deals that Apple signed with some game developers.

In a new support document, Apple clarified what happens when games are removed from Apple Arcade, including how long the games will remain playable, how a user's saved game progress will be affected, and more.

For a lot of people these latest OS releases represent what will be best versions of what the last year provided.
Score: 1 Votes (Like | Disagree)

I was actually just thinking this yesterday. I notice that dumb banner at the top of the screen when the phone is unlocking the watch has gone away again. Lots of little things seem to have been ironed out.

Kind of makes me want to skip 16 until about this time next year. Probably will at least wait until .1

Maybe .3 as that is how long it took Universal Control to be implemented. :D

Here's a listing of what got added since the WWDC 2021 OS's were released last Sept and later on. You can readily discern how much has been added/redesigned/changed. :)

Maybe .3 as that is how long it took Universal Control to be implemented. :D

Here's a listing of what got added since the WWDC 2021 OS's were released last Sept and later on. You can readily discern how much has been added/redesigned/changed. :)

For some reason the bottom of the iOS 15 updates page is in French. Despite the URL clearly saying en-us. It even links to fr and fr-ca pages. I had to switch to en-gb to get it in English. Weird.

And back on topic there were some major, major bugs not fixed until 15.1.1. Actually each release except for 15.5 had an immediate .1 release to fix a major bug.

Waiting for about 16.5 does actually seem to be a good idea. But who am I kidding, I'll be downloading the second it's available.
Score: 1 Votes (Like | Disagree)

British gutter press ran a very unusual and out of place article the other day informing people that they need to upgrade to 15.6 “NOW” because 15.5 is basically hacked and has 39 critical vulnerabilities or some other such bluster. Highly suspicious story.

Leave it to the news to create clickbait, but its hasn't been hacked, only some real vulnerabilities addressed.
Apple’s release notes ('https://support.apple.com/en-gb/HT213346') for iOS 15.6 lists 37 security fixes, some of which are pretty serious.
Examples