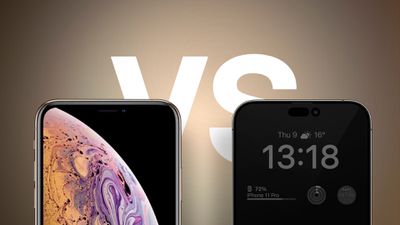 darngooddesign
Now do one for the iPhone 4.
Score: 14 Votes (Like | Disagree)

Killbynumbers
I'll probably still wait another year. Nothing wrong whatsoever with my XS Max still on it's original battery.
Score: 13 Votes (Like | Disagree)

Now do one for the iPhone 4.

Jokes aside, this is the last comparison we are posting. We went as far back as the iPhone X. Anyone with an iPhone 7 or older… JUST UPGRADE! :D
Score: 11 Votes (Like | Disagree)

Mr. Dee
Still waiting for this one. ?

TheYayAreaLiving ?
Dang! This is a nice show-down. All these articles bring back so many good memories and flashbacks.

I have always admired the back glass of the iPhone XS. The rounded edges, the champagne color, and the astonishing wallpaper. Apple definitely nailed it with the iPhone XS. ?

Anyone with an iPhone 7 or older… JUST UPGRADE! :D

As an owner of an iPhone 7+ that still does everything for me it's always done, and still does it really well, what is a legitimate reason I should upgrade? Not being able to install iOS 16 does not bother me; iOS 15 is good enough.
Score: 8 Votes (Like | Disagree)
Read All Comments