With many customers choosing to upgrade their iPhone every two or three years nowadays, there are lots of iPhone 11 Pro users who might be interested in upgrading to the iPhone 14 Pro later this year. Those people are in for a treat, as three years of iPhone generations equals a long list of new features and changes to look forward to. 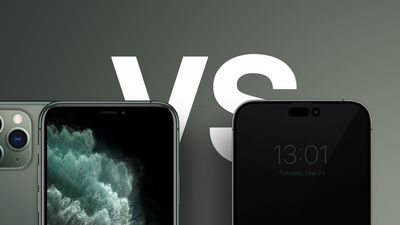 Below, we've put together a list of new features and changes to expect if you upgrade from an iPhone 11 Pro to an iPhone 14 Pro. The list includes features added to the iPhone 12 Pro and iPhone 13 Pro over the last few years, as well as features rumored for the iPhone 14 Pro, which Apple is expected to announce in September as usual.

Given the vast number of improvements and changes since the iPhone 11 Pro, this list is far from comprehensive, but it does highlight most major features.

AppleFan735
As much as I want to, my iPhone XS Max is still in perfect working order. Hard to justify an upgrade.
Score: 32 Votes (Like | Disagree)

contacos
Waiting for the usb-c model. Whenever that is ?
Score: 23 Votes (Like | Disagree)

darngooddesign
For most people, the camera improvements determine if its worth upgrading a one or two year old phone.
Score: 15 Votes (Like | Disagree)

happydude
the fact this article exists is an implicit argument to not upgrade from a 13 for sure, probs the 12 as well. nothing new or ground breaking to justify a jump from my 12 pro at the least.
Score: 14 Votes (Like | Disagree)

darngooddesign
The 14 Pro will be nice upgrade from my XR.
Score: 12 Votes (Like | Disagree)
Read All Comments