This week was sure a busy one in the Apple world, with a flurry of announcements out of CES early in the week followed by a rash of Mac- and iPhone-related rumors later in the week. 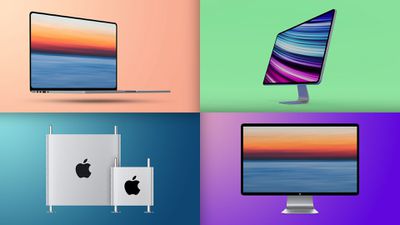 The new rumors this week included details on updated MacBook Pro, iMac, and Mac Pro models, as well as a few other tidbits, so make sure to read on below to get caught up!

According to Kuo, Apple will be releasing 14-inch and 16-inch MacBook Pro models featuring Apple silicon, a redesign with flatter iPhone 12-like edges, the return of MagSafe for charging, and more ports. Apple is also said to be getting rid of the controversial Touch Bar that has replaced the traditional function keys for the past several years.

Bloomberg's Mark Gurman also weighed in on the topic, corroborating many of the details shared by Kuo and noting that the new MacBook Pro models will also feature "brighter, higher-contrast" displays and that the return of MagSafe will allow for faster charging.

Along with redesigned 14- and 16-inch MacBook Pro models, Apple is also planning a redesign for its iMac lineup, according to Bloomberg's Mark Gurman.

Gurman says there will be two iMac models to replace the current 21.5-inch and 27-inch sizes, and they will feature a design similar to that of the Pro Display XDR, with slimmer display bezels all around (including removal of the long-standing "chin" beneath the display) and a flat back. The new iMacs will also be based on Apple silicon chips with more processing cores and graphics horsepower than seen in the initial batch of M1 Macs released in late 2020.

Also on the desktop Mac front, Gurman says Apple is working on a pair of Mac Pro models. The first is a direct successor to the current model and is likely to continue to use Intel processors.

The second model is said to be less than half the size of the current Mac Pro and will feature a mostly aluminum exterior with a design that could "invoke nostalgia" for the Power Mac G4 Cube of old.

With Apple's Pro Display XDR priced at $5,000 (plus an additional $1,000 for the stand), many Apple users have been clamoring for Apple to launch a new consumer-focused display, and Gurman says Apple also has one of these in the works.

Few details on the new consumer display are known beyond scaled-down specs compared to the Pro Display XDR, but it would be Apple's first consumer-focused display since the Thunderbolt Display was discontinued in 2016.

In a separate report, Gurman highlighted developments on the iPhone front, claiming that Apple is considering adding an under-display Touch ID sensor to this year's iPhone, in addition to the Face ID TrueDepth sensor.

He also says Apple is indeed working on foldable iPhones and developed several prototype foldable screens with electronics behind the screen and a mostly invisible hinge. Development is still in its early stages, however, so a launch of a foldable iPhone is "likely years away," if it ever happens at all.

This week marked the first all-digital CES 2021, and while Apple does not directly participate in the convention, there are always a wide variety of Apple-related announcements, including HomeKit smart home accessories, AirPlay 2 speakers and TVs, CarPlay receivers, and more.

On our YouTube channel this week, we highlighted some of the best Apple-related accessories introduced at CES 2021. This year's picks include Kensington's new iPad Pro docking station with built-in iPhone and AirPods wireless charging, LG's first UltraFine display with OLED technology for Macs, wireless earphones from Belkin that will integrate with Apple's Find My app for lost-and-found capabilities, and more.

Visit our CES 2021 news hub for our complete coverage, and subscribe to MacRumors on YouTube for more Apple-related videos.

The report claims that the new AirPods Pro will come with a slightly narrower charging case, but no further details were provided about either product.

Bloomberg's Mark Gurman has previously reported that Apple is aiming to make the second-generation AirPods Pro more compact by eliminating the stem that sticks out from the bottom, but it's unclear if Apple will achieve this feat. Gurman said Apple had a design in testing with a more rounded shape that fills more of the ear, similar to Google's Pixel Buds.

As for the iPhone SE, many rumors have suggested that a larger version of the device could be released. Apple analyst Ming-Chi Kuo has previously said that Apple plans to release an iPhone with an LCD and a Touch ID power button in 2021, and perhaps that device will be the new iPhone SE.

Apple's long-rumored AirTags items trackers are expected to be managed through the Find My app on the iPhone, iPad, and Mac. This week, a simple Safari trick was discovered that allows anyone to get an early look at this tab on these devices.

As spotted by MacRumors reader David Chu, entering the link findmy://items in Safari on devices running iOS 14.3, iPadOS 14.3, macOS 11.1, or later leads to a hidden "Items" tab in the Find My app where both AirTags and third-party tracking accessories are expected to be managed. It's still unclear when AirTags will launch, but Apple often introduces its first new products of a calendar year in March.

jjDevt
this was one of the best weeks in terms of rumors in a long time. very excited for all of the Mac stuff.
Score: 9 Votes (Like | Disagree)

Logic368
Just waiting for the return of the AirPort Extreme now!!! With WiFi 6E lol
Score: 8 Votes (Like | Disagree)

Onelifenofear
Removing the Touch Bar would be a massive shame... just like removing force touch on the phone and especially the watch.

Just because some people don't use it doesn't mean many people do. They should make it more customisable though - and the 3rd party apps like better touch tool etc make it fantastic.

Esc key should be physical though!

Or perhaps they are putting in a whole old changeable Physical keyboard.... that would be nuts.
Score: 6 Votes (Like | Disagree)

Blkant
A MacBook Pro without the potentially cost increasing and awful Touch Bar and the return of something useful like the MagSafe? A potentially reasonably priced modular MacPro? The return of Touch ID vs the inconsistent an unreliable Face ID?

It’s almost like a return to form and function from the days of old. Surely to good to be true in the days of Cook.
Score: 5 Votes (Like | Disagree)
Read All Comments