Apple is developing two versions of the Mac Pro to succeed the ‌Mac Pro‌ that was first released in December 2019, according to a new report from Bloomberg. 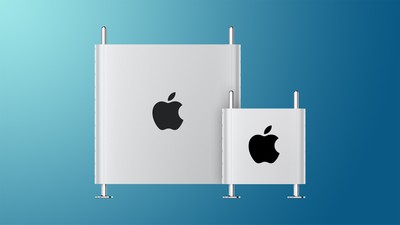 The first updated ‌Mac Pro‌ is a direct successor to the current ‌Mac Pro‌ and it will use the same design. It may also be equipped with Intel processors rather than Apple silicon chips, and it could be one of the sole machines in the Mac lineup to continue to rely on Intel technology. Rumors suggest that most other machines are transitioning to Apple silicon.

The second machine will use Apple silicon chips and it will be less than half the size of the current ‌Mac Pro‌, putting it somewhere between the existing ‌Mac Pro‌ and the Mac mini. It will feature a mostly aluminum exterior, and Bloomberg suggests that it could "invoke nostalgia" for the Power Mac G4 Cube.

Apple is testing Apple silicon chips with as many as 32 high performance cores for its desktop computers, and 16 to 32-core graphics options are also in the works. For its highest-end machines, though, Apple is developing more expensive 64 and 128-core GPUs, which would be several times faster than the graphics options Apple uses from AMD.

There is no word on when the two new ‌Mac Pro‌ models might come out. Apple is working on transitioning its Mac lineup to Apple silicon chips, a process that is expected to take up to two years to complete. In a prior report, Bloomberg said that the Apple silicon ‌Mac Pro‌ was planned to launch by 2022.

hortod1
How much are the wheels?
Score: 44 Votes (Like | Disagree)

Why would they keep intel over mac silicon?

Because Professionals work in professional environments, where they can't just switch $100,000+ worth of hardware overnight to the latest trend, which isn't compatible with even half of their software.
Score: 37 Votes (Like | Disagree)

ArPe
This time it will work because of Apple Silicon. The Cube and the Trashcan were hampered by Intel and Motorola and heat.
Score: 22 Votes (Like | Disagree)

Intel but no 32-Bit support.

32-bit support? Are you planning to spec that out with a floppy drive and a parallel printer port?
Score: 21 Votes (Like | Disagree)

madmin
And an affordable monitor with all the ports including Ethernet to go with it please
Score: 19 Votes (Like | Disagree)
Read All Comments

Monday November 2, 2020 12:46 pm PST by Juli Clover
As part of the transition to Apple Silicon, Apple is designing a new Mac Pro that has a smaller form factor, reports Bloomberg. The new Mac Pro is said to have a design that looks like the current design, but in a more compact enclosure that's "about half the size." It is not known if the new Mac Pro will replace the current model or will be sold alongside the current Mac Pro, which was...
Read Full Article • 486 comments

Friday November 6, 2020 9:39 am PST by Hartley Charlton
After announcing the transition away from Intel chips at WWDC earlier this year, Apple is expected to unveil its first Macs with Apple Silicon at its "One More Thing" event on Tuesday, November 10. Apple's custom chips are Arm-based and similar to the A-series chips used in its iPhones and iPads. But what tangible benefits can Apple Silicon offer in the Mac, and why should customers be...
Read Full Article