As seen in screenshots obtained by MacRumors in 2019, Apple's long-rumored AirTags items trackers are expected to be managed through the Find My app on iPhone, iPad, and Mac. Now, any user can get an early look at this tab. 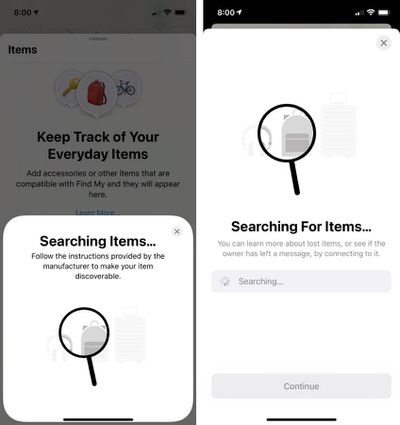 Users can also enter the URL in Safari on macOS 11.1 and view the hidden "Items" text in the Find My app on a Mac.

While the URL is more convenient and works for anyone, registered Apple developers can also enable the "Items" tab on an iPhone under Settings > Developer > Display Items Tab. This toggle appears on iOS 14.3 and later.

Similar to Tile, AirTags are expected to help users keep track of their personal belongings, such as their keys, wallets, and backpacks, with users receiving a push notification on their Apple devices when they are separated from a tagged item. AirTags are expected to support Ultra Wideband for improved location accuracy, with helpful augmented reality functionality through the Find My app for locating misplaced items.

At WWDC 2020, Apple announced that the Find My app will also support finding third-party products and accessories, and the hidden "Items" tab is expected to be used for this too. Earlier this week, Belkin unveiled new Soundform wireless earphones with Find My compatibility that are set to launch in March or April.

Typing findmy://items into Safari will take you to this hidden UI in Find My! pic.twitter.com/CakKBGEuNh — David Chu (@davidvanchu) January 13, 2021

Apple accidentally referenced AirTags in a YouTube video last April, so we know this accessory is the real deal, but an exact release date still remains up in the air. Apple typically holds its first event of a year in March, but with in-person events not being hosted any time soon, a virtual event or press release is possible at any time.

BeefCake 15
Every time I see a find like this, I picture a software engineer getting yelled at :)
Score: 24 Votes (Like | Disagree)

Solver
I want to take one of these airtags and tape it to my Apple TV remote.
Score: 15 Votes (Like | Disagree)

But. I still wonder. How is this not going to cause massive privacy concerns and dramatic relationship troubles with people shoving these tags in everyone's bag they want to spy on... It seems highly unethical to sell a super small surveillance device to the masses.

Lol this argument still? News flash:
There’s plenty of other tiny trackers on the market already. With some of them being actual gps based.

Anyone can already track you by throwing a $50 android phone into your bag/car etc.

If someone wants to track you, they haven’t been waiting for Apple to release a product to do it.
Score: 6 Votes (Like | Disagree)

Every time I see a find like this, I picture a software engineer getting yelled at :)

Yep. Not something you’d accidentally type as a URL! Good find!
Score: 5 Votes (Like | Disagree)

DogHouseDub
Is the word Airtags mentioned there? It appears to be part of the 3rd party integration offered as a dev preview mid 2020.
https://developer.apple.com/find-my/

Wednesday April 7, 2021 10:06 am PDT by Juli Clover
Apple today announced the launch of its Find My network accessory program, which is designed to allow third-party Bluetooth devices to be tracked in the Find My app right alongside your Apple devices. According to Apple, the first accessory companies to take advantage of the new Find My integration include Belkin, Chipolo, and VanMoof, with devices set to be available beginning next week. ...
Read Full Article • 127 comments

Vivaldi 5.1 Adds Ability to Scroll Through Browser Tabs Horizontally in the Tabs Bar

Wednesday February 9, 2022 3:46 am PST by Tim Hardwick
Vivaldi for Mac received an update today that brings yet more new features to the highly customizable web browser, including a handy way of managing multiple tabs using horizontal scroll. Most modern web browsers usually handle multiple tabs by shrinking the tabs into smaller and smaller segments to fit them all in on screen, but this can quickly look cluttered and make it progressively...
Read Full Article • 33 comments

Wednesday April 7, 2021 11:54 am PDT by Joe Rossignol
Apple today announced the launch of its Find My network accessory program, allowing compatible third-party accessories to be tracked in the ‌Find My‌ app right alongside Apple devices. The first products that work with the Find My app will include a new Chipolo item tracker, Belkin earbuds, and select VanMoof e-bikes. While it was initially suspected that Find My's third-party accessory...
Read Full Article • 26 comments