Surprise late night rumors last night provided us with our first in-depth look at what we can expect from the new MacBook Pro models that are coming in 2021, and there are some significant changes in the works. 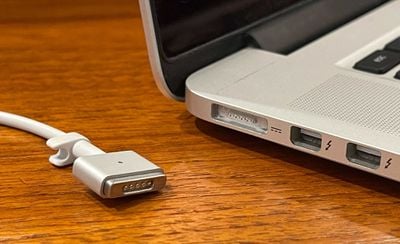 Along with additional ports, a new flat-edged design, and the removal of the Touch Bar, Apple's updated MacBook Pro machines will readopt MagSafe.

MagSafe in the 2021 MacBook Pro Models

Apple analyst Ming-Chi Kuo believes Apple will go back to a ‌MagSafe‌ charging connector, and Bloomberg's Mark Gurman in a separate report agreed and clarified that the ‌MagSafe‌ port will be a standalone charging port used instead of USB-C, with the new port located next to the USB-C ports.

‌MagSafe‌ first debuted in January of 2006 when Apple launched the first-ever MacBook Pro, which was also the first Mac laptop with an Intel chip inside. There have been a total of two versions of ‌MagSafe‌, and the 2006 MacBook Pro used the original ‌MagSafe‌ connector.

The first ‌MagSafe‌ port featured a square-shape design with five holes, which attached to an accompanying connector using a magnetic connection. The idea was that if the connector was tugged, it would detach quickly and smoothly without causing damage to the ‌MagSafe‌ port or pulling the MacBook Pro off of a table or desk.

As with USB-C, ‌MagSafe‌ had a design that allowed the connector to be attached to a Mac in either orientation, and charging was even simpler than with USB-C because there was no need to enter a cable into a port - you just lined up the connector and it adhered right in place magnetically. Apple developed 45W, 60W, and 85W ‌MagSafe‌ connectors for various machines.

Apple in 2012 introduced a new version of ‌MagSafe‌ called ‌MagSafe‌ 2, featuring a thinner and wider port and a new connector design that was suited to the thinner Macs that Apple unveiled that year. ‌MagSafe‌ 2 connectors were not compatible with original ‌MagSafe‌ ports, requiring an adapter.

Apple went back to its T-shaped design for ‌MagSafe‌ 2 and stuck with it for the life of ‌MagSafe‌, and this is likely the same design and cable orientation that we'll see in the 2021 MacBook Pro models.

In 2016, with the introduction of the USB-C MacBook Pro models, Apple began discontinuing ‌MagSafe‌. MacBook Pro models released between 2016 and 2020 do not use ‌MagSafe‌ technology and instead charge through one of the machine's USB-C ports. ‌MagSafe‌ was fully phased out of the Mac lineup, and the last machine with ‌MagSafe‌, the 2017 MacBook Air, was discontinued by Apple in July 2019.

Apple started bringing back ‌MagSafe‌ in 2020 with the launch of the iPhone 12 lineup. The ‌iPhone 12‌ models feature a built-in ring of magnets to support a magnetic wireless charger option which Apple has named ‌MagSafe‌, and soon, ‌MagSafe‌ charging could be revived across Apple's product lineup.

Based on the rumors we've heard so far, it sounds like the upcoming ‌MagSafe‌ connector in the 2021 MacBook Pro models will look similar to the ‌MagSafe‌ 2 connector that has since been discontinued. It is unlikely to be identical, however, as it is said to charge new MacBook Pro models more quickly than USB-C.

Past ‌MagSafe‌ cords were prone to breakage and fraying around the charging connector, so Apple may have a new design in mind for the 2021 MacBook Pro models to alleviate the problem.

In the past, Apple has not licensed its ‌MagSafe‌ technology, but that could change for the 2021 MacBook Pro models. Apple is allowing third-party companies to develop MagSafe-based charging options for the iPhone, so this time around, we could potentially see third-party ‌MagSafe‌ charging solutions for the Mac, but that's not guaranteed.

With Apple planning to debut a new ‌MagSafe‌ connector option, it's a sign that the hardware needed to charge a Mac will continue to be shipped with Mac machines. With the 2020 iPhones, Apple stopped providing power adapters for charging purposes, but it doesn't seem like that's a move that will expand to the Mac lineup.

The switch back to ‌MagSafe‌ is likely to be popular with MacBook Pro owners who have been missing the feature since Apple transitioned to USB-C. In fact, the new MacBook Pro models appear to be removing all of the features that Mac owners have complained about, including the Touch Bar that has never caught on the way that Apple hoped it would, and the limited number of ports on USB-C machines.

jml1982
So stupid that they got rid of this! I upgraded last year and within the first week I tripped over the cord and brought my brand new Macbook Pro tumbling to the ground... This would never have happened with the MagSafe.
Score: 76 Votes (Like | Disagree)

zorinlynx
I still have a MagSafe-era Macbook Pro, but one thing I had been looking forward to when I do decide to upgrade has been USB-C charging and being able to use such a wide variety of charging devices, like powerbanks, power strips with USB-C PD ports (Anker makes some really nice ones) and so on. Requiring MagSafe for charging basically means you need a line level (120/240V) power outlet and the original Apple charging brick to charge your MacBook.

So I hope if this rumor is true and Apple brings MagSafe charging back to the MacBook, that the USB-C ports are still usable to charge with, even if it's slower.
Score: 44 Votes (Like | Disagree)

justinhill
PLEASE for the love of god, leave the brick-end of the cable USB-C. MagSafe power adapters fraying at the brick-end were the bane of my existence.
Score: 29 Votes (Like | Disagree)

JPack
Apple patented this in 2016.

Mazda 3s
They should have never removed it. I bought a 2017 MacBook Pro, and it didn't take long for my 1-year (at the time) to walk around the kitchen table and pull it to the ground as he tripped over the power cord. Dented the s**t out of the top lid, but at least it still worked and closed properly.
Score: 25 Votes (Like | Disagree)
Read All Comments