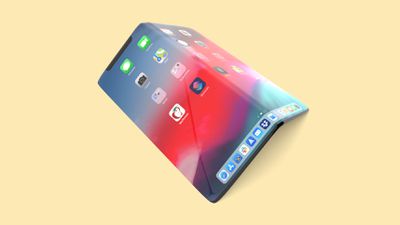 Development has not yet expanded beyond a display and Apple does not have full foldable ‌iPhone‌ prototypes in its labs. Like foldable smartphones from other companies, a foldable ‌iPhone‌ would allow for Apple to create a larger display in a package that is still pocketable.

Apple has discussed several foldable screen sizes, including one that unfolds to a size similar to the 6.7-inch display on the iPhone 12 Pro Max. Apple's designs are said to have a "mostly invisible hinge" with electronics located behind the display rather than two panels separated by a visible hinge.

Bloomberg suggests that a foldable ‌iPhone‌ is likely "years away" or "ultimately may never be introduced," with Apple mostly focusing on the updates to its flagship iPhones and iPads that are coming in 2021.

The iPhone 13 models planned for this year are not expected to feature major design changes, as the 2020 ‌iPhone‌ models marked a significant technology and design overhaul. Apple engineers are said to consider the 2021 iPhones as an "S" version of the 2020 models. Apple has in the past used the "S" nomenclature in years where ‌iPhone‌ models featured more minor updates.

Though design changes are expected to be minor, Apple is testing an in-screen Touch ID fingerprint reader that would mark a major change to the biometric systems that Apple has used for flagship devices since the launch of the ‌iPhone‌ X.

The fingerprint sensor would be made available in addition to Face ID, and would be convenient for ‌iPhone‌ users who cannot unlock their iPhones with facial recognition when using masks.

Apple has also considered removing the charging port for some ‌iPhone‌ models in favor of wireless charging, and that appears to be something that's still on the table for the 2021 iPhones at this time.

Bloomberg's report today also confirms that AirTags are expected to see a 2021 launch and it reiterates iPad Pro rumors that suggest Apple is working on an updated version with a mini-LED display and a faster processor.

Caliber26
In-display Touch ID sounds like a dream come true but I won’t hold my breath for it. If anything, I think they’d put it on the power button seeing how they’ve already developed it for the iPad Air.
Score: 50 Votes (Like | Disagree)

kiranmk2
Yes to TouchID. No to wireless only.
Score: 35 Votes (Like | Disagree)

Yes to TouchID. No to wireless only.

Wireless only will cause me to give up iPhone. What about CarPlay? I'm not buying a new car just for wireless CarPlay. Also not willing to pay $200 for Apple's inevitable "magical" CarPlay adapter. I still like doing full restores using my PC / iTunes. Removing the charging port is just too far.
Score: 20 Votes (Like | Disagree)

iapplelove
They have all the money in the world, they are trying to make a car, throwing money at different phone tech should always be in the works.
Score: 13 Votes (Like | Disagree)
Read All Comments