Well that was quite the jam-packed week of Apple news, wasn't it? From a media event on Tuesday where Apple unveiled three new Macs based on the brand-new custom M1 chip to the release of macOS Big Sur on Thursday and the release of two new iPhones on Friday, this week had it all. 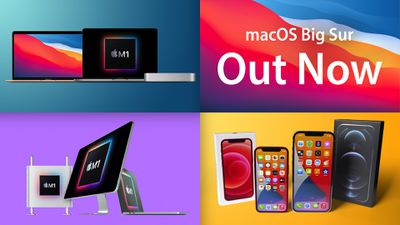 Next week is shaping up to be another busy one as well, with HomePod mini deliveries beginning and the new MacBook Air, MacBook Pro, and Mac mini models making their way into customers' hands, but before we get to that, take a breath and read on below for details on everything that happened this week.

Everything Announced at Tuesday's Apple Event in 6 Minutes

Apple on Tuesday held its third virtual media event in as many months, this time focusing on the Mac. As expected, Apple introduced the first Macs based on Apple Silicon in the form of the new M1 chip.

Apple's event was an efficient one, clocking in at under an hour, but we also boiled it down to just a six-minute summary, so make sure to check out our video recap and links to all of our coverage from the event.

In the wake of Tuesday's event, Apple on Thursday finally released macOS Big Sur to the public, bringing a new look and a host of new features to macOS.

The launch did not come without hiccups, however, as Apple's servers appear to have crumbled following the launch, halting downloads of Big Sur and even preventing some third-party Mac apps from launching due to Apple's Gatekeeper service being down.

The craziness has settled down, so once you've been able to get macOS Big Sur installed, be sure to check out our features guide and our more detailed roundup with all of the details. We've also got a great list of 50 tips and tricks to get you started on macOS Big Sur.

It didn't take long for the first benchmark results to show up for Apple's new Macs with the M1 chip, and those results are looking impressive.

With a multi-core score well over 7,000 on Geekbench 5, the new MacBook Air manages to outperform even the highest-end 16-inch MacBook Pro with Intel's 9th-generation Core i9 processor.

Benchmark results have also surfaced for the new 13-inch MacBook Pro and Mac mini, showing very similar performance, which is to be expected given that the M1 chip has virtually identical tech specs in all three machines beyond the lowest-end MacBook Air configuration having a 7-core rather than 8-core GPU.

If you need help deciding between the new MacBook Air or 13-inch MacBook Pro with the M1 chip, we've put together a helpful buyer's guide.

It was easy to lose track given all of the news surrounding Apple's Mac event this week, but this week also saw the launch of two new iPhone models, the iPhone 12 mini and the iPhone 12 Pro Max.

Advance media reviews of both the iPhone 12 mini and iPhone 12 Pro Max have been positive, although some reviewers have some concerns about limited battery life on Apple's smallest flagship phone. We of course have our own hands-on overview of both of the new phones, and we'll have more coverage next week once we've some more time to spend with them.

Apple released the first iOS 14.3 beta on Thursday, and MacRumors was able to dig into the software update and make some discoveries.

The update also includes an icon that may hint at the design of Apple's rumored over-ear AirPods Studio headphones, appears to be preparing to support third-party Bluetooth item trackers in the Find My app, and may begin suggesting third-party apps to users during a device's setup process in certain countries.

Apple also released the first betas of watchOS 7.2 and tvOS 14.3.

Following its event on Tuesday, Apple reiterated that the transition to Apple Silicon across the Mac lineup will take about two years to be completed.

Apple did not reveal which Macs will be getting M-series chips next, but based on rumors, we can expect redesigned 14-inch MacBook Pro, 16-inch MacBook Pro, 24-inch iMac, and smaller Mac Pro models, with at least some of those models expected to launch in 2021.

At WWDC 2020 in June, Apple also said that it still had exciting new Intel-based Macs in development in the interim, but it's unclear if that will extend beyond the updated 27-inch iMac released in August.

Amid a very busy week for Apple, the first reviews and unboxing videos have been shared for the HomePod mini, with many media outlets and YouTubers finding that the speaker delivers "big sound" despite its compact design.

Priced at $99, the speaker is available to order in the U.S., Australia, Canada, France, Germany, Hong Kong, India, Japan, Spain, and the U.K. Orders will begin in China, Mexico, and Taiwan later this year.

HomePod mini will begin arriving to customers on Monday, November 16.

iBluetooth
It's amazing how Apple managed to make a SoC outperforming Intel by leaps, even when using much less energy. I feel like 386 -> 486 -> Pentium era again, when your new computer would impress you with all the speed-gains!
Score: 3 Votes (Like | Disagree)

jonnysods
It’s a busy couple of months for Apple they are rolling. i have to say I really enjoyed this past week’s keynote. Actually Mac rumours are my absolute favourite.
Score: 2 Votes (Like | Disagree)

Populus
In my humble opinion, we may see new M1X chips for the beefier macs, such as the iMac and the MacBook Pro 16”. Also, the iMac Pro is slowly losing its place on the lineup, unless we see a regular iMac with the fanless M1 (like the MBA), and a more powerful iMac Pro with active cooling. But honestly, I would go with just one iMac to simplify the lineup.
Score: 2 Votes (Like | Disagree)

StellarVixen
What are future possibilities with the ARM? We are already at 5nm, and next is 3 I heard. How long until we hit the ceiling with classical computers?
Score: 1 Votes (Like | Disagree)

dakwar
Excited to try out the HomePod mini. The biggie has amazing sound! If the mini can deliver even half the sound quality, ... absolute game changer.
Score: 1 Votes (Like | Disagree)

The issue of only two monitor support (including the built-in screen) is disappointing.

I can always get a single giant monitor, but I can see that the list of compromises is stacking up.

Calm down, this is obviously the first, low-end chip. It's the quickest to make, because it seems to be basically the upcoming iPad Pro chip but with added support for a couple of thunderbolt ports etc. And it's self-evidently aimed at the MBA, low end MBP, and low-end Mini. Next to come will be at least one high end chip, the first rumoured with 12 cores, aimed at the higher end MBP, iMac, and possibly Mac Pro. One would expect greater connectivity such as more ports and more screens. And possibly another even higher end chip with maybe more cores and connectivity to additional external RAM, SSD, and graphics cards, thus suitable for the Mac Pro. Apple did already state they will replace the entire Mac line up with Apple Silicon, so there is no way they can do that with only the M1 chip.
Score: 1 Votes (Like | Disagree)
Read All Comments