HomePod mini reviews have now been shared by media outlets and YouTubers, providing us with the first impressions of the speaker's sound quality and design. We've rounded up some opinions of the speaker below. For more video reviews, see here. 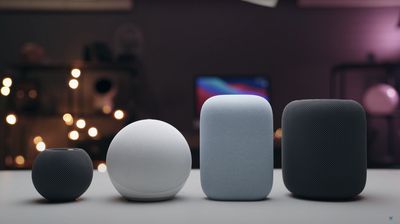 HomePod mini is equipped with the same S5 chip as the Apple Watch Series 5, which Apple says allows the speaker to "analyze the unique characteristics of the music and apply complex tuning models to optimize loudness, adjust the dynamic range, and control the movement of the driver and passive radiators in real time."

I've used a lot of different smart speakers in my day, and honestly, I'm really impressed with the sound the company was able to get out of the 3.3-inch device.

It's full and clear and impressively powerful for its size.

Yet despite its much lower cost and smaller size, the HomePod Mini sounds phenomenal compared to other similarly priced speakers I've used. Even with the volume at only 40%, the HomePod Mini's sounds fill up my large living room richly and evenly.

Indeed, the sound blew me away when I first started streaming tunes. It didn't sound far off from the quality you hear from the original HomePod, yet it sounded twice as good to my ears to the similarly sized sub-$150 wireless speakers I'm used to hearing. After listening to the HomePod Mini for only a few days, when I went back to my old JBL wireless speakers—and even the speakers on my 16" MacBook Pro (which are fantastic speakers for a laptop)—both now seem tinny in comparison to the quality of the sound from the HomePod Mini.

Not everyone was equally impressed. The Verge's Dan Seifert said that while the HomePod mini sounds good, it doesn't sound as good as similarly priced competitors like the Amazon Echo and Google's Nest Audio:

So it sounds good, but I can't say the HomePod mini sounds great. And next to the larger Echo and Nest Audio, both of which cost the same, it simply can't keep up. It doesn't have the presence, volume, or sound stage of either, and it certainly can't match the Echo's bass output. As they say, there's no replacement for displacement.

Forbes' David Phelan said the HomePod mini has a "cool, compact design" that is unmistakably HomePod with its mesh covering:

It's still unmistakably a HomePod though, with the familiar mesh covering that's soft to the touch, not that you'll be touching it all that much. And it comes in the same two colors as the original: a dark, smokey gray that's nearly black but softer-looking, called Space Gray, and white. The white isn't really white, because of the slightly darker color behind the mesh, making for a subtle but appealing look. Both are attractive and more or less indistinguishable from the HomePod shades.

Reviews confirm that the HomePod mini cable ends with a USB-C port for use with the included 20W power adapter in the box.

The Verge's Dan Seifert found the HomePod mini's touch control surface is harder to see from across a room than the Amazon Echo's glowing ring:

In my testing, I've found this light-up panel to be harder to see from across the room than the Echo's glowing ring. Unless you’re right next to the HomePod mini, it's hard to tell when Siri has heard your voice command and is responding.

HomePod mini is priced at $99 in the United States. Pre-orders began Friday, November 6, with the first deliveries to customers and in-store availability set to begin Monday, November 16. In addition to the United States, launch day countries include Australia, Canada, France, Germany, Hong Kong, India, Japan, Spain, and the UK.

I just want a speaker that sounds great personally. Couldn’t care less about the “smart” features.

I was going to buy a HOMEpod this year, now I’m questioning whether I should get two of these instead...
Score: 17 Votes (Like | Disagree)

Mdracer
I have no idea how apple got this HomePod mini to cost less than their MagSafe Duo charger?

On a SIRIous note though, my kids are addicted to yelling at Siri and listing to music all day so these may end up under the tree.
Score: 14 Votes (Like | Disagree)

The key take away here, is the sound it’s putting out for the price point. Some of these other Smart speakers that you’re referring to that ‘do more’, come at the cost of sounding like garbage. And if the Mini can execute more rich and dynamic sound over the other smart speakers by spending an extra $30 more, then I’m all for it.
Score: 14 Votes (Like | Disagree)

Yea like Amazon Alexa, however the HomePod sounds much better. I have both the original HomePod and an Amazon Echo, the Echo is a much better smart speaker, but the HomePod is much better for when I want to blast out the music.
Score: 10 Votes (Like | Disagree)

...and none of them are as well integrated to work as smoothly with other Apple products as this one, which is why it exists. I can’t send messages from my iPhone with a Google speaker, I can’t instantly hand off music from Apple Music, or use it via Airplay with an Apple TV Etc. It’s an Apple device to use with other Apple devices.
Score: 7 Votes (Like | Disagree)

yegon
My only interest in smart speakers is for music, so I love the HomePods. Stereo pair in my lounge, incoming Mini’s for the bedroom and kitchen.

The big HomePods hold the peculiar status of both my favourite device and most frustrating device, heheh. When they work, they are tremendous....but does it REALLY need “just a moment” occasionally when I ask it to lower the volume???
Score: 7 Votes (Like | Disagree)
Read All Comments

Thursday March 11, 2021 2:02 pm PST by Juli Clover
The MagPad by Cozy is a soft, silicone pad that's designed to fit over Apple's MagSafe Charger. Priced at around $7, the MagPad comes in a range of colors and patterns. Size wise, the MagPad adds about an inch of additional space to the MagSafe Charger, and it's about the size of a standard Qi-based wireless charger. The silicone material is textured and the bright colors are more attractive ...
Read Full Article • 48 comments