Apple today introduced a new MacBook Air as its first Mac with a custom Apple Silicon processor known as the M1 chip. The new MacBook Air is up to 3.5x faster than the previous-generation MacBook Air, with up to 5x faster graphics performance. 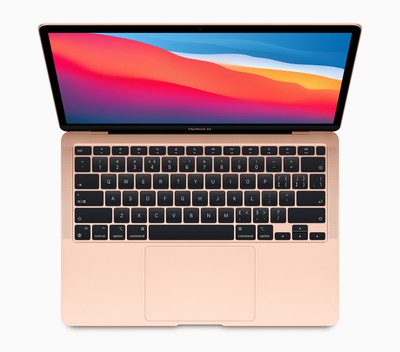 The new MacBook Air along with new 13-inch MacBook Pro and Mac mini models are available to order now on Apple.com and through the Apple Store app, with the first deliveries and in-store availability to begin November 17. The new MacBook Air continues to start at $999 in the United States, with $899 pricing available for students and other educational customers.

The first three Macs with M1 chips mark the beginning of Apple's transition away from Intel processors in Macs. Back in June, Apple revealed its plans to begin using its own custom Apple Silicon processors in Macs, promising industry-leading performance per watt. At the time, Apple said that the transition would take about two years to be completed.

In the interim, Apple teased new Intel-based Macs in development, including an updated 27-inch iMac released in August. Apple said that it will continue to support and release new versions of macOS for Intel-based Macs for years to come.

neuropsychguy
Macrumors is degenerating into a bunch of whiny users again. 2020 has been the most impressive year for new Apple products in a long time. This is a great start to a new era for Apple.
Score: 30 Votes (Like | Disagree)

edwrap
Wow, can’t believe they switched from expensive Intel chips to their own ARM chips and kept the price the same. The profit margin on these must be insane, even for Apple.
Score: 27 Votes (Like | Disagree)

TheYayAreaLiving
I'm going to miss the Fan : Now we won't know if the Mac is working hard or not.
Score: 26 Votes (Like | Disagree)

Wow, can’t believe they switched from expensive Intel chips to their own ARM chips and kept the price the same. The profit margin on these must be insane, even for Apple.

uh apple had to pay for all the R&D alone for the new chips...instead of just buying them from intel.
Score: 24 Votes (Like | Disagree)

profets
Low end of the Silicon SoCs, yet tremendous performance improvement, significant power savings, and to top it off fan-less design. Honestly quite impressive.
Score: 15 Votes (Like | Disagree)

"We took at the fan. That is just nuts."

Yes. I agree. When things get heated, you cannot remove the heat from the case.

So then why isn't heat an issue on iPads? :)
Score: 14 Votes (Like | Disagree)
Read All Comments

Friday May 7, 2021 6:55 am PDT by Sami Fathi
According to Apple leaker Jon Prosser, Apple's upcoming release of the MacBook Air will feature various colors, similar to the colors in the newly released 24-inch iMac. In the latest video of his YouTube channel Front Page Tech, Prosser says the same source who accurately provided him information on the first Apple silicon iMac coming in colors has told him that he recently saw a prototype...
Read Full Article • 369 comments

Thursday November 12, 2020 7:55 am PST by Joe Rossignol
Just a few days after Apple's first Macs with its custom-designed M1 chip became available to order, the first orders are now beginning to ship to customers, with deliveries set to begin arriving to customers on Tuesday, November 17. While most pre-orders are still in the "processing" or "preparing to ship" stage on Apple's website, UPS is beginning to show some MacBook Air orders as "in...
Read Full Article • 108 comments

Wednesday March 17, 2021 9:14 am PDT by Mitchel Broussard
Amazon today is offering Apple's 512GB M1 MacBook Air for $1,172.92, down from $1,249.00. This is one of the first notable discounts on the new MacBook Air since earlier in the year, and it's currently the best price available online among the major Apple resellers. It's being sold by Expercom on Amazon. Note: MacRumors is an affiliate partner with some of these vendors. When you click a link...
Read Full Article • 43 comments