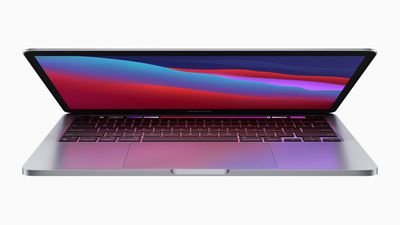 The first ‌Apple Silicon‌ 13-inch MacBook Pro replaces the low-end 13-inch Intel model, but Apple's ‌M1‌ chip boasts a more powerful 8-Core CPU and an 8-Core GPU featuring a 16-core Neural Engine, which when paired with the MacBook Pro’s active cooling system, is up to 2.8x faster than the previous generation, according to Apple, making it up to 3x faster than the best-selling Windows laptop in its class.

Machine Learning is up to 11x faster, and for on-device Machine Learning tasks that use the Neural Engine, the new 13-inch MacBook Pro is now the world's fastest compact pro notebook, says Apple. It also features up to 17 hours of wireless web browsing and up to 20 hours of video playback, which is up to twice the battery life of the previous generation, making it the longest battery life ever on a Mac.

"There has never been a chip like M1, our breakthrough SoC for the Mac. It builds on more than a decade of designing industry-leading chips for iPhone, iPad, and Apple Watch, and ushers in a whole new era for the Mac," said Johny Srouji, Apple's senior vice president of Hardware Technologies. "When it comes to low-power silicon, M1 has the world's fastest CPU core, the world’s fastest integrated graphics in a personal computer, and the amazing machine learning performance of the Apple Neural Engine. With its unique combination of remarkable performance, powerful features, and incredible efficiency, M1 is by far the best chip we’ve ever created."

Other new features in the new 13-inch MacBook Pro include 802.11ax Wi-Fi 6 and studio-quality mics, while Apple’s latest camera ISP in the ‌M1‌ chip enables sharper images and more detail in shadows and highlights on video calls. The new MacBook Pro also includes Apple's Secure Enclave in the ‌M1‌ and Touch ID, and features two Thunderbolt ports with USB 4 support. The laptop weighs 3-pounds and features a Magic Keyboard and a Retina display.

macnchiefs
Did they include the wall charger? Or do we have enough of those laying around too?
Score: 26 Votes (Like | Disagree)

up to 16 GB? WTF? Even iPhones have merely more than that...

you're confusing RAM with storage...
Score: 26 Votes (Like | Disagree)

this is the first time im gonna say it, and i'll say it strong: this is not a pro device. they took the exact same chip showed off for a macbook air and a mac mini, slapped pro on it and then somehow claimed this sucker is going to perform way better, and called it "pro"

not even like an M2 or M1X, it's the same processor. no mention of it being higher clock speed, higher ram, better gpu, etc in the base config at this higher price.
Score: 18 Votes (Like | Disagree)

V-l-a-d-i-m-i-r
Am I alone feeling more than disappointed about no body redesign? :(
And, they are comparing performance to Windows laptops, which again brings forth my favorite topic: is some sort of official 'Boot Camp' support for M1 Macs expected? No word on this so far.
Score: 17 Votes (Like | Disagree)

hailey bee
I will wait for 14" MBP, with smaller bezels, and let first adopters test out this 13" iteration.
Score: 16 Votes (Like | Disagree)
Read All Comments