Apple's embargo has lifted on reviews for the HomePod mini ahead of the speaker launching on Monday. In addition to our in-depth HomePod mini reviews roundup, we've gathered a collection of unboxing videos and sound quality tests below. 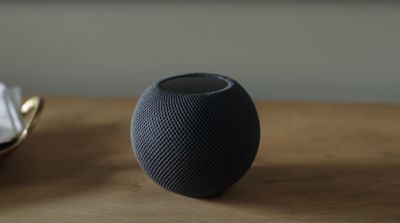 As its name implies, the HomePod mini is a smaller version of the standard HomePod, standing just 3.3 inches tall. However, despite its more compact, spherical design, Apple says the HomePod mini still delivers "amazing sound" using "computational audio." The speaker is equipped with the same S5 chip as the Apple Watch Series 5, allowing the speaker to optimize loudness, adjust the dynamic range, and more.

Like the standard HomePod, the HomePod mini offers HomeKit smart home capabilities, handing off of audio from an iPhone, multi-user detection, ambient sounds, and compatibility with Apple's new Intercom feature for sending voice messages — from one HomePod to another, or to an iPhone, iPad, Apple Watch, AirPods, or vehicle with CarPlay.

HomePod mini is priced at $99 in the United States. Pre-orders began Friday, November 6, with the first deliveries to customers and in-store availability set to begin Monday, November 16. In addition to the United States, launch day countries include Australia, Canada, France, Germany, Hong Kong, India, Japan, Spain, and the UK.

magbarn
I may be in the minority, but I definitely miss the well written reviews of yesteryear than youtube videos yearning for clicks and subscriptions?
Score: 31 Votes (Like | Disagree)

profets
Amazing, the $99 HomePod mini includes the 20W USB-C charger in the box, but the $129 MagSafe duo charger (which is essentially just 2 induction chargers in a portable design) doesn't. Wtf.
Score: 22 Votes (Like | Disagree)

Yay, a mini homepod! Can't wait to take this camping, or to the Beach or for the BBQ!....oh wait. Tethered.

My issue is with Amazon and their business model there being one that benefits from serving ads for junk you can buy in their store. I have had Alexa suggest many times things I can buy from the store many times after asking for the news, etc.

yup. I'd rather not have amazon harvest all my voice information. Siri will do just fine.
Score: 12 Votes (Like | Disagree)

HomePod Mini seems to be good enough for what it is , but for $150 you can get Echo Studio , which sounds fantastic IMHO

HomePod Mini seems to be good enough for what it is , but for $150 you can get Echo Studio , which sounds fantastic IMHO

My issue is with Amazon and their business model there being one that benefits from serving ads for junk you can buy in their store. I have had Alexa suggest many times things I can buy from the store many times after asking for the news, etc.
Score: 9 Votes (Like | Disagree)
Read All Comments

Monday November 1, 2021 6:54 am PDT by Joe Rossignol
Apple today announced that the new HomePod mini colors, including yellow, orange, and blue, are now available to order on Apple.com and in the Apple Store app in the United States, Canada, and Mexico. The new colors are also available for same-day pickup at select Apple Store locations in the United States and Canada. The new HomePod mini colors will also be available to order in China, Hong ...
Read Full Article • 74 comments

Friday June 18, 2021 8:53 am PDT by Mitchel Broussard
The HomePod mini has dropped to $79.99 on Simply Mac today, down from its original price of $99.00. This is one of the first major discounts on the HomePod mini since it launched last year, and it's in stock in both Space Gray and White at this price on Simply Mac. The HomePod mini is a smaller version of the HomePod, measuring in at 3.3 inches tall compared to the HomePod's 6.8-inch height. ...
Read Full Article • 58 comments