Apple this afternoon briefly released the first betas of iOS and iPadOS 14.3 before pulling the updates again, but during the time the software was available, some people were still able to download it and have been digging into the features.

As noted on the MacRumors forums, iOS 14.3 introduces the ProRAW format for the iPhone 12 Pro and iPhone 12 Pro Max. Apple introduced ProRAW when announcing the new ‌iPhone 12‌ lineup, but said that it would be coming at a later date. 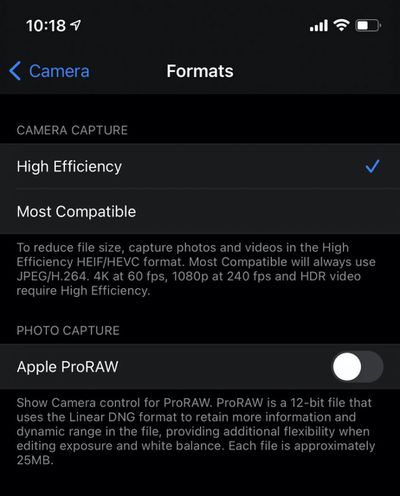 ProRAW is designed for those who prefer to shoot in RAW but also want to take advantage of the Apple image pipeline data like noise reduction and multiframe exposure adjustments.

The ProRAW feature can be enabled in the Camera section of the Settings app for those who have installed the iOS 14.3 beta on a new ‌iPhone 12‌ Pro or Pro Max. When enabled, there's a RAW toggle in the upper right side of the camera app that can be tapped to turn it off or on.

Photos taken with ProRAW are approximately 25MB in size, so photographers may want to use the feature sparingly if iPhone storage space is an issue.

Along with ProRAW support, the update also appears to add suggested third-party apps. According to 9to5Mac, there's code in iOS 14.3 that indicates Apple will show third-party app options to those who are updating to the software.

These app suggestions will be provided only in some countries where required by local laws, so users in the United States may not see the third-party app menu. It's not entirely clear which countries will see the app suggestions, but those that do will see this message: "In compliance with regional legal requirements, continue to view available apps to download."

The Health app appears to have a new section on Pregnancy .

According to Apple's release notes, App Clips can be launched by scanning App Clip Codes using Camera or from Control Center.

Ecosia can now be set as the default search engine as an alternative to Google, Yahoo, Bing, and DuckDuckGo. Ecosia lets users fund the planting of trees when searches are conducted.

The Home app appears to have new notifications for when accessories have updates available, which suggests that some HomeKit accessories might be able to be updated through the Home app in the future.

Code in iOS 14.3 confirms a new Cardio Fitness feature for Apple Watch. "Apple Watch can access your cardio fitness, a strong indicator of overall health. To enable estimates outside of a workout, turn on Wrist Detection."

Cardio Fitness levels are available for users age 20 and above, and are estimated by age. Apple will send Cardio Fitness Notifications to the ‌iPhone‌ from the Apple Watch.

There's an icon in iOS 14.3 that may hint at the design of the AirPods Studio.

As noted by The 8-Bit, the first beta of iOS 14.3 had a reference to Fitness+ in the iOS 14.3 analytics settings under Privacy > Analytics & Improvements. The setting was unfinished and could not be toggled on, but it suggests that Fitness+ may be released alongside iOS 14.3. The setting was removed in beta 2.

Know of other new features in iOS 14.3 that aren't highlighted here? Let us know in the comments and we'll add them to the list.

I may be wrong but I don’t think these are technically raw photos... raw as in exactly what the sensor saw.
I think even with these there have been some computational adjustments made which is why the extra ram of the 12 pro is required?

The problem with RAW for non-Pro’s is that it DOES give you control, BUT, since Apple’s AI isn’t applied, you get a pic that looks worse than what you take with HEIC. You can MAKE it look better if you know how to, but most don’t. So, Apple captures RAW and then, in real-time applies the same kind of adjustments someone who KNOWS what they’re doing would do. So, you get a good looking pic BUT if you want to go deep and mess around at the RAW data level, you can do that.

That’s how u feel about Live Photos. I never use it except for the rare occasion when I want to capture something cute my dog might be doing.

I know someone that uses it all the time now just because there’s that one grandkid that always wants to hide once they know the shutter’s ready to snap. She showed me a pic she had taken saying that “my granddaughter always ducks”. I showed her the Live Photo feature and she captured the moment BEFORE her grandkid hid her face :)
Score: 5 Votes (Like | Disagree)

A fix on the texting delay. Please!!! How long will this take?

Yes. In addition to the texting bug there is an annoying one in the Mail app that will not mark a message as read after properly reading it for a long time.
Score: 4 Votes (Like | Disagree)

PortoMavericks
At this point, Stadia is dead.

Is the latest Series X controller supported too?

Yes, it uses the same Xbox One profile.
Score: 3 Votes (Like | Disagree)

luvbug
How about fixing your enterprise network infrastructure so your bzillion customers can go on with their lives??
Score: 3 Votes (Like | Disagree)