Apple's biggest product launch of the year is finally here, with the iPhone 12 and 12 Pro getting into customers' hands for the first time, along with a bonus debut for the colorful fourth-generation iPad Air. 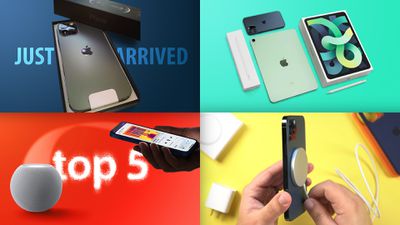 This week's top stories were all about those launches, including the new MagSafe Charger that Apple hopes will bring a new level of convenience and speed to wireless charging. Read on below for the highlights of our coverage from a busy launch week!

The iPhone 12 and iPhone 12 Pro are now available, and that means a host of first impressions, reviews, and unboxing videos for the devices are being shared by users and members of the media. We've also gone hands-on with iPhone 12 Pro ourselves, and we'll have much more to share in the coming days.

Most reviews have found the iPhone 12 to be quite similar to the iPhone 12 Pro, with both devices featuring a 6.1-inch OLED display, A14 Bionic chip, and a new flat-edge design. iPhone 12 Pro goes a few steps further with a better camera system, LiDAR Scanner, and a stainless steel frame.

Quite a few details about the iPhone 12 and iPhone 12 Pro surfaced this week ahead and following the launch. For instance, learned that the devices can download iOS software updates over 5G, are equipped with Qualcomm's Snapdragon X55 modem, and that 5G in Dual SIM mode is only available in China at launch.

Early testing on the new models has shown improved display durability thanks to the new Ceramic Shield, but worse battery life compared to the iPhone 11 Pro.

New iPad Air Reviews: 'The Best Tablet for Most People'

Alongside the new iPhone models, the fourth-generation iPad Air has also debuted, and early reviews are in for the new tablet, which features a larger 10.9-inch edge-to-edge display, a faster A14 Bionic chip, a USB-C port, and Touch ID built into the power button.

Most reviews agree that the new iPad Air is Apple's best tablet for the average customer, as it has been upgraded with a similar design and features as the iPad Pro, despite starting at a lower price of $599 — albeit with only 64GB of storage. iPad Pro models start at $799 with 128GB of storage. The A14 Bionic chip in the new iPad Air is also newer than the A12Z chip in the iPad Pro.

iPhone 12 models feature a new MagSafe system that allows for precise wireless charging and easy-to-attach magnetic accessories on the back of the devices, such as Apple's new MagSafe Charger.

Priced at $39, the MagSafe Charger looks like a larger Apple Watch charging puck, featuring a circular design with a cord at one end that plugs into a power adapter. The charger is designed to snap on to a ring of magnets built into the ‌iPhone 12‌ and 12 Pro, for a perfect alignment without any hassle.

Watch our hands-on video of the MagSafe Charger and MagSafe Cases for a closer look at the new accessories, and subscribe to our YouTube channel for more Apple-related videos every week!

Apple last week introduced a new $99 HomePod mini, which is a more affordable alternative to the full-size HomePod that's been around since 2018. HomePod mini pre-orders begin Friday, November 6, and ahead of time, we have shared a list of the top five reasons to consider purchasing the smart speaker.

Despite having a compact design, Apple says the HomePod mini still delivers "amazing sound" using "computational audio." The speaker is equipped with the same S5 chip as the Apple Watch Series 5, allowing the speaker to "analyze the unique characteristics of the music and apply complex tuning models" to optimize loudness and adjust the dynamic range.

fumi2014
Smart phone developments seem small these days. I bought the XS back in 2018 and with these incremental improvements every year, I can't see it being worth upgrading until 2022.
Score: 3 Votes (Like | Disagree)

Yes. It was called cycloramic
Score: 1 Votes (Like | Disagree)

Maybe I’ve missed it somewhere... but I’m very surprised not to see any mentions of the MagSafe’s case... has anyone noticed the animation, color matched to the case, when you place the phone in the case? I have been dorking out on it all day.

I’ve been looking for any mention of it online all weekend, and no one seems to have noticed.
Score: 1 Votes (Like | Disagree)

NameRequired
Maybe I’ve missed it somewhere... but I’m very surprised not to see any mentions of the MagSafe’s case... has anyone noticed the animation, color matched to the case, when you place the phone in the case? I have been dorking out on it all day.
Score: 1 Votes (Like | Disagree)
Read All Comments