Alongside the iPhone 12 models, Apple introduced a new $39 MagSafe Charger that's meant to work with the magnets in the ‌iPhone 12‌ Pro models to charge them up at a maximum of 15W. 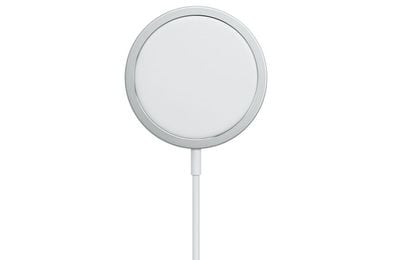 The MagSafe Charger is technically able to be used with older iPhones, but it's not a good idea because the charging with non-iPhone 12 devices is so slow.

We did two tests with the iPhone XS Max, draining the battery down to 1 percent, putting it in Airplane Mode, and then charging for a half an hour.

We've tested a lot of Qi-based wireless chargers and have never seen 7.5W Qi charging speeds that slow. For reference, a 7.5W charger is able to charge an ‌iPhone‌ to about 25 percent in a half hour.

We specifically tested the ‌iPhone‌ XS Max in the exact same conditions as the ‌MagSafe‌ charger with a standard 7.5W Belkin charger and it charged to 26 percent in the 30 minute window.

For those who don't have an ‌iPhone 12‌ and were considering getting a ‌MagSafe‌ charger to use with an older ‌iPhone‌, don't. It's not worth it for the slow charging speeds and you're better off with a standard Qi charger.

The ‌MagSafe‌ charger will work fine with the ‌iPhone 12‌ and should charge faster than Qi, but it's not as fast as charging with the Lightning to USB-C cable and a 20W power adapter, as Joanna Stern found out in a charging speed test. That's not too surprising because a Lightning to USB-C charger paired with a 20W+ power adapter enables fast charging, where the ‌iPhone 12‌ models can charge to 50 percent in one half hour.

Apple-Guy
These wireless chargers are such a waste of electricity, so much is lost in just heat...
Score: 34 Votes (Like | Disagree)

Heat_Fan89
I don’t get the fascination with wireless charging. I can either plug in a device so I can lay a phone on top of it to charge or I can simply plug the phone using its charging port. At least with the charging cable connected you can pickup the phone and use it and make calls. Now wireless charging would be a neat idea if I can use the phone and charge it without having to lay the phone over a charger.

Reverse charging is an even a tougher sell to me. Why would I drain my battery to charge another device? I’d rather charge that device with its own cable.
Score: 31 Votes (Like | Disagree)

I don’t get the fascination with wireless charging. I can either plug in a device so I can lay a phone on top of it to charge or I can simply plug the phone using its charging port. At least with the charging cable connected you can pickup the phone and use it and make calls. Now wireless charging would be a neat idea if I can use the phone and charge it without having to lay the phone over a charger.

Reverse charging is an even a tougher sell to me. Why would I drain my battery to charge another device? I’d rather charge that device with its own cable.

I used to think this, but once you get used to just grabbing and going, especially if you're constantly walking to and from your desk at work and have to keep your phone with you, it's pretty addicting; especially when my desk has an inclined wireless charger... so I have my phone there and when an alert comes in, thanks to Face ID (which I still generally prefer Touch ID), I can just look at it and check the alerts without having to reach for it.

saudor
i wonder what the heat output of these things. Whenever i charge my 8+ wirelessly, it heats up quite a lot. That heat couldnt be good for the battery health as they absolutely hate heat
Score: 16 Votes (Like | Disagree)

DotCom2
This is unacceptable. Apple needs to address this ASAP because this is damaging to their reputation.
Score: 14 Votes (Like | Disagree)