Apple today seeded the second beta of iOS 14 to developers for testing purposes, one week after seeding the first beta following the WWDC keynote. 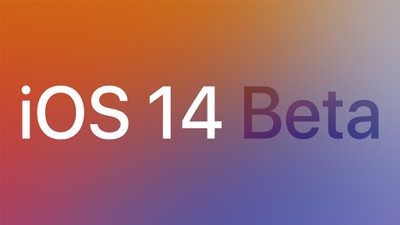 Registered developers can download the beta over the air after installing the proper profile from the Apple Developer Center.

‌iOS 14‌ introduces a redesigned Home Screen that supports widgets for the first time, plus ‌widgets‌ have been redesigned and can now be customized in three sizes through the new ‌widgets‌ gallery.

Incoming phone calls and FaceTime calls no longer take up the entire ‌iPhone‌/iPad display, and Siri requests have also been minimized so summoning ‌Siri‌ doesn't monopolize the screen. ‌Siri‌ is smarter in ‌iOS 14‌ and can send audio messages, and dictation can now run on device.

A Picture in Picture mode allows users to watch videos or use ‌FaceTime‌ while using other apps,

For the ‌iPad‌, the Apple Pencil can now be used in any text field, with handwritten text converted automatically to typed text thanks to the new Scribble feature.

There are tons more features in ‌iOS 14‌ and iPadOS 14, so make sure to check out our iOS 14 roundup and our iPadOS 14 roundup for a full list of everything new. We'll also be highlighting all of the features tweaks and changes made in beta 2 in a separate article that's coming soon.

Only registered developers can download the iOS and ‌‌iPadOS 14‌‌ betas at this time, but Apple plans to provide a public beta for public beta testers in July. Beta testing for ‌‌iOS 14‌‌ will last for several months, with the update set to be released in September 2020.

bjoswald
Bring on the public beta!
Score: 19 Votes (Like | Disagree)

I'm a risk-taker and I have it on my daily driver phone and iPad. No major bugs that hinder me from doing what I need to do, but that doesn't mean beta 2, 3, 4, etc. won't introduce a curveball and change all that. Every beta can bring new issues. I don't recommend unless you are okay with the possibility of having to wipe a reinstall 13 at some point if it gets too bad for you.
Score: 10 Votes (Like | Disagree)

one week after seeding the first beta ('https://www.macrumors.com/2020/06/22/apple-seeds-ios-14-beta-1-to-developers/') following the WWDC keynote.

Well, two weeks and one day.
Score: 9 Votes (Like | Disagree)

Would love to know what the new features/bug fixes are instead of another "Here is iOS 14" articles!

Often that isn't really known until people install the update and discover what's new, at which point the articles get updated or new ones might appear covering those details.
Score: 8 Votes (Like | Disagree)

Yes, it is quite stable for a beta. I haven't had any issues with apps, even those listed in the forums about apps that won't launch
Score: 8 Votes (Like | Disagree)

Someone would actually have to use it for some time to have some decent idea of something like that.
Score: 7 Votes (Like | Disagree)
Read All Comments

Thursday June 17, 2021 7:33 am PDT by Joe Rossignol
Apple today lowered the prices of AppleCare+ plans for MacBook Air and 13-inch MacBook Pro models equipped with the M1 chip. Coverage offered by the plans, as well as accidental damage fees, appear to remain unchanged. In the United States, AppleCare+ for the MacBook Air now costs $199, down from $249. The new price applies to both M1 and Intel-based MacBook Air models, although Apple no...
Read Full Article • 136 comments