Tim Cook Teases Apple Car: 'It's Going to Be Christmas Eve for a While' 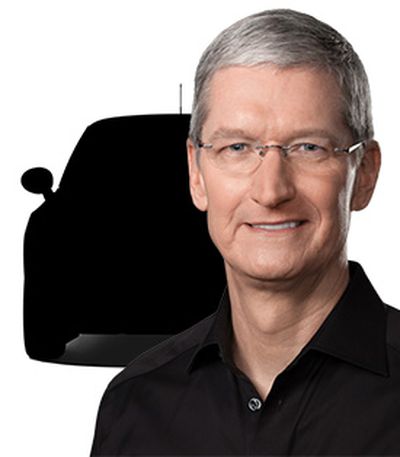 Apple CEO Tim Cook has remained tight lipped about the so-called "Apple Car," but today he dropped a hint about the much-rumored electric vehicle at the company's annual shareholders meeting in Cupertino (via Business Insider).

Cook's comment suggests that, if such a project exists, the purported "Apple Car" will not be publicly revealed for quite some time -- in line with reports claiming Apple is currently targeting a 2019 or 2020 production date.

Apple has recruited hundreds of engineers from Tesla, Ford, GM, Samsung, A123 Systems, Nvidia, and elsewhere, likely to work on the purported car project, which has allegedly been called "Project Titan" internally. Tesla CEO Elon Musk recently said it is an "open secret" that Apple is developing an electric car, based on its number of recent automotive-related hirings.

Other evidence that points towards Apple's interest in the automotive industry includes its discussions with a secure Bay Area testing facility for connected and autonomous vehicles and its meeting with the California DMV to review self-driving vehicle regulations in 2015. More recently, Sunnyvale residents have reported hearing loud "motor"-sounding noises at night on a campus where Apple leases at least one building.

When questioned about the "Apple Car" in a recent interview, Cook provided a more elaborate non-answer:

Yeah, I’m probably not going to do that. The great thing about being here is we’re curious people. We explore technologies, and we explore products.

And we’re always thinking about ways that Apple can make great products that people love, that help them in some way. And we don’t go into very many categories, as you know. We edit very much. We talk about a lot of things and do fewer. We debate many things and do a lot fewer.

Apple's internal "Project Titan" team has reportedly faced some obstacles over the past month. In January, supposed "Apple Car" project lead Steve Zadesky informed colleagues that he would be leaving the company for personal reasons. Then, just a few days later, it was reported the "Apple Car" team is on a hiring freeze as Apple executives are unhappy with the progress being made on the development of the vehicle.

Other news out of Apple's shareholders meeting today includes the company's commitment to customer privacy and raising its dividends annually. Cook also hinted that now is a "great opportunity" for Apple to acquire smaller technology companies. He said Apple has made 19 acquisitions in the past 15 months.

Porco
One product Apple will happily add backdoors to.
Score: 24 Votes (Like | Disagree)

H2SO4
Cars are expensive enough, why do we need an Apple tax in addition to all the other taxes associated with them?
Score: 18 Votes (Like | Disagree)

hybroid
How did you infer an Apple Car from that quote??

kevinkyoo
2019 or 2020? Good. Please first focus on fixing the software and hardware on your computers, phones, and watches before venturing and expanding out more than you can afford to
Score: 12 Votes (Like | Disagree)

Saturday May 21, 2022 9:00 am PDT by Hartley Charlton
With around four months to go before Apple is expected to unveil the iPhone 14 lineup, the overwhelming majority of rumors related to the new devices so far have focused on the iPhone 14 Pro, rather than the standard iPhone 14 – leading to questions about how different the iPhone 14 will actually be from its predecessor, the iPhone 13. The iPhone 14 Pro and iPhone 14 Pro Max are expected...
Read Full Article • 253 comments