In an interview with the BBC, Tesla CEO Elon Musk said it is an "open secret" that Apple is developing an electric car. Musk made the statement when asked if he had heard anything about Apple's car development plans and went on to highlight the huge number of hires Apple has made as evidence.

"Well, it's pretty hard to hide something if you hire over a thousand engineers to do it," he said, before adding that he believed Apple was serious about the project. "This is an open secret."

Musk went on to say Tesla welcomes participation by any company that wants to create electric vehicles, but he cautioned that it's "quite hard to do." He brushed off the interviewer's question of whether an Apple car would be a threat to Tesla, and said that he believes Apple will develop a "compelling" electric car because "it seems like the obvious thing to do." 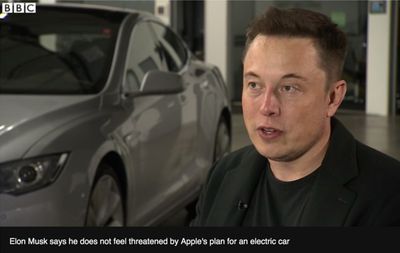 "Tesla will still aspire to make the most compelling electric vehicles, and that would be our goal, while at the same helping other companies to make electric cars as well."

Musk is aware of Apple's hiring efforts because Apple has made an effort to hire former Tesla employees for its car project. The two companies have developed something of a rivalry as they compete for talent, leading Musk to take a jab at Apple in an October interview, saying "If you don't make it at Tesla, you go work at Apple," a statement he later retracted.

The first rumors surrounding Apple's car project, allegedly codenamed "Project Titan," surfaced in early 2015. Since then, Apple has recruited dozens of engineers and researchers from the automotive industry and other car-related fields, poaching employees from companies like Tesla, Ford, GM, Chrysler, Volkswagen, Samsung, and more.

Over the past few months, there's been a growing body of evidence pointing towards work on a car. Apple sought out a secure testing facility for testing electric vehicles in May of 2015, and met with DMV officials to discuss the laws and regulations surrounding self-driving vehicles in California in September. Most recently, Apple registered three auto-related top-level domain names, including apple.car, apple.cars, and apple.auto.

Little is known about Apple's car project, but the company is rumored to be working on an electric vehicle. Rumors have disagreed on the topic of autonomy, but the most recent information suggests that while Apple is exploring self-driving technology, it is a feature that may come in a later version of the Apple Car.

freepomme
There's no getting around it. It's just going to have to have Windows!
Score: 39 Votes (Like | Disagree)

DevNull0
Adapted from an old joke, but frighteningly possible:

Features of the Apple Car:
1. Every time they repaint the lines on the road, you have to buy a new Apple car.
2. Every year, you'll have to replace the Engine with a new version. This will be free, but the handling will become less responsive. The only way to fix this will be to buy a new car.
3. It will be the narrowest car ever made. There will only be room for a driver, but for some reason people will say this is better than the old clunky fat cars from over 100 years ago. Besides, everyone loves driving, why would you want a passenger?
4. Because it's so narrow, there won't be room for a steering wheel. But the car will come with an iTouch that links to the car via bluetooth to let you steer using touch screen controls.
5. There will only be one pedal. You press it with your right foot to accelerate and left foot to brake.
6. Headlights will not be user replaceable. When the headlights burn out, you have to buy a new car.
7. The oil, engine, gas and alternator warning lights would be replaced with a single "General Car Fault" warning light.
8. People will get excited about the "new" features in the Apple Cars, forgetting completely that they have been available in other cars for many years.
9. The Apple car will only work with Apple fuel. It will be much more expensive, less efficient, and more polluting than gasoline, but Apple will tell us how great it is for the environment anyway.
10. The airbag system would say "Are you sure?" before going off and start a 60 second countdown.
11. They won't build their own engines, but buy them from their most hated competitors who they're constantly involved in court battles with.
12. The latest engine will have 32 cylinders, and multi-point fuel injectors. But the fuel pump will be so under-powered that the car stalls several times a day.
13. They will replace the liquid cooling system with an air cooling system. If you ever take the car up to highway speeds, you'll have to stop for 5 minutes every half hour, but the car sure will run quiet.
14. You will only be able to listen to music on Apple Music. Playing any other audio in the car will void the warranty.
15. All roads will have to become toll roads with 30% of the tolls going to Apple. If any states refuse to charge these tolls, your car won't drive on them.
16. If you don't upgrade to the latest version every year, people will make fun of you even though your car drives faster
17. The car will only be able to drive in the right lane. The ability to switch to other lanes will require an ICP (in car purchase) and you'll have to spend 5 TimGolds every time you change lanes.
18. Using the windshield wipers will be 10 TimGolds.
19. Instead of being made of steel, the car will be made out of paper thin aluminum. Crashes will not be survivable but every will applaud when Apple makes he car 3mm narrower.
Score: 29 Votes (Like | Disagree)

japanime
Apple is doubling down on open secrets. :D
Score: 16 Votes (Like | Disagree)

S-A
Elon is the visionary that Apple sorely lacks to bring this project to life... You can't just go to Foxconn and tell them to assemble you a car by following this blueprint. As an Apple shareholder, I wish they would focus their efforts elsewhere.
Score: 13 Votes (Like | Disagree)

iPhone.Freak
If only Apple and Tesla worked on a car together...

That would be something great.
Score: 12 Votes (Like | Disagree)

BugHunter
I'm pretty sure Musk wants competition.
Tesla is going to be the premium electric car brand for the foreseeable future. If they get a lot of other companies releasing electric cars, that would increase the demand for charge stations and influence public perception that electric cars are practical.
Basically increasing the overall demand by a large amount, and lose sales to the new competitors by a small amount = net win.
Score: 12 Votes (Like | Disagree)
Read All Comments