Apple's work on its much-rumored Apple Car is progressing, and the company is said to be scouting for secure locations in the Bay Area where the vehicle can be tested, reports The Guardian. Engineers working on the car project are said to have met with officials at GoMentum Station in May to explore the site as a possible testing facility, suggesting work on the car may be further along than previously thought if there are already prototypes ready for testing.

GoMentum Station is a 2,100-acre former naval base run by the Contra Costa Transportation Authority that's located in the East Bay, approximately an hour and a half from Apple's Cupertino headquarters. The site, advertised as "the largest secure test facility in the world," is used to test both Connected Vehicles and Autonomous Vehicles and is poised to become "the center of CV/AV research." 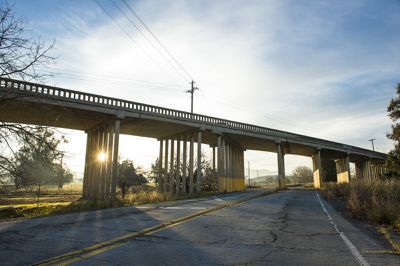 In correspondence obtained by the Guardian under a public records act request, Apple engineer Frank Fearon wrote: "We would... like to get an understanding of timing and availability for the space, and how we would need to coordinate around other parties who would be using [it]." [...]

In late May, Jack Hall, program manager for autonomous vehicles at GoMentum Station, wrote to Fearon to postpone a tour of the facility but noted: "We would still like to meet in order to keep everything moving and to meet your testing schedule."

What's most notable about today's rumor from The Guardian, aside from the fact that the project is nearly to the prototype phase, is the site's supposition that the vehicle is autonomous. Previous reports about the car, being developed under the code name "Project Titan," have disagreed about whether the car is self-driving.

According to The Wall Street Journal, the car is electric but not autonomous, while Reuters has sources that say the project does indeed include self-driving cars. It's possible that Apple is exploring both autonomous and non-autonomous electric vehicles under the car project, but Apple's interactions with GoMentum Station don't offer insight into the company's plans as the site is for both autonomous and connected vehicles.

Over the last several months, details on Apple's work on an electric car have been trickling out. Apple is said to have hundreds of employees working on the project, and has been recruiting many automotive experts. Apple has also reportedly met with several automobile manufacturers, and even went so far as to explore using the electric BMW i3 as the base for the Apple Car, though talks did not progress to the partnership stage.

Apple is rumored to be aiming to launch its Apple Car in 2020, giving it five years of development time. Of course, the car is still in the early testing stages, and Apple often tests products that never see the light of day. There's a possibility that the Apple Car may never make it to market, even after years of testing, should Apple's plans for the vehicle not pan out.

farewelwilliams
I'm going to walk around with a stop sign on my tshirt.
Score: 21 Votes (Like | Disagree)

People need to give up on this idea of Apple building a car. They will never do it. They are working on in-car electronics. And they should work with Tesla (or buy Tesla, too).

Profit margins on cars are slim. The market is saturated with established companies. And there's enough liability to bring down the company.

Then Tesla should give up, too. As should every other car manufacturer. **** it, let's go back to walking. Margins are higher in shoes.
Score: 15 Votes (Like | Disagree)

Dilster3k
Someone call Scott Fortstall... I need a reliable self-driving car, not one that randomly crashes.
Score: 15 Votes (Like | Disagree)

JCrz
People need to give up on this idea of Apple building a car. They will never do it. They are working on in-car electronics. And they should work with Tesla (or buy Tesla, too).

Profit margins on cars are slim. The market is saturated with established companies. And there's enough liability to bring down the company.
Score: 7 Votes (Like | Disagree)

Saucesome2000
I would say transportation is something that definitely is overdue for a major advancement. I would love to be able to eat my breakfast and start my work day at the beginning of my long commute. Or to see my commute become much shorter through advancements in transport. I welcome Apple and anyone who can help move that along.
Score: 7 Votes (Like | Disagree)

What a picture. You really have such bad roads in the USA?

Not in the majority of the USA, no... in South Carolina, I have never seen a road that bad. But in Massachusetts, I saw them all the time because the government is corrupt.
Score: 7 Votes (Like | Disagree)
Read All Comments